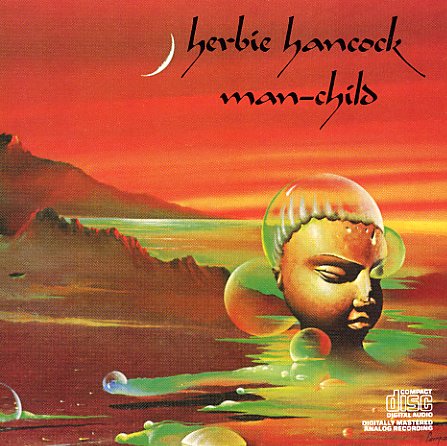 Funky mid 70s Herbie Hancock – one his funkiest albums of the era! Herbie plays a host of cool keyboards – like Fender Rhodes, Arp, and clavinet – and he's joined by a group that includes just about all of the Headhunters – including Paul Jackson on bass and Mike Clarke on drums – plus help from a great array of other excellent guests – including Bennie Maupin and Wayne Shorter on reeds, Harvey Mason on drums, and even some guest keyboards from Stevie Wonder! The album's great – maybe a bit understated than Thrust, but still equally wonderful – and the whole thing's worth it alone for the classic uptempo cut "Hang Up Your Hang Ups" – alongside other cuts that include "Bubbles", "Heartbeat", and "Sun Touch".  © 1996-2023, Dusty Groove, Inc.

Head Hunters
Columbia, 1973. Very Good+
LP...$39.99 (CD...$3.99, LP...$41.99)
A seminal jazz funk session of the 70s – Herbie Hancock's legendary meeting with The Headhunters, and a killer batch of tunes that really gave the combo their name! Herbie's playing a wide range of keys here – including Fender Rhodes, clavinet, and Arp – but almost even better is ... LP, Vinyl record album

Best Of Herbie Hancock (Blue Note)
Blue Note, 1960s. Very Good+ 2LP Gatefold
LP...$19.99
Very nice 2LP set that collects some of Herbie's best 60s work for Blue Note – and which moves past the hits to feature some nice gems from hard to find albums. This work is a beautiful mix of tight soul jazz and freer modal playing – and nearly every track's a perfect example of why ... LP, Vinyl record album

Weather Report (1971)
Columbia, 1971. Near Mint-
LP...$14.99
The groundbreaking first album from Weather Report – a massive session that took fusion to a whole new level for the 70s! Most of the players here had been associated with Miles Davis at some point in the year or two beforehand – and Miles' electric work is definitely a starting point ... LP, Vinyl record album

Cosmic Scene
Columbia, 1958. Sealed
LP...$29.99
A lost Duke Ellington gem from the late 50s – a session that has a decidedly different look than some of his other records of the time! We don't know if the Duke was into Sun Ra – but it almost seems like he was copping his thunder with this title and band name – a fair bit more ... LP, Vinyl record album

In A Silent Way
Columbia, 1969. Very Good
LP...$29.99
There's nothing "silent" here – as the album's a bold entry in the electric years of Miles Davis – one that still features contributions from Herbie Hancock, Wayne Shorter, and Tony Williams – but which also expands the lineup considerably – really reaching out ... LP, Vinyl record album

8:30
Columbia/ARC, 1979. Near Mint- 2LP Gatefold
LP...$28.99
Weather Report at the height of their 70s fame – captured live in a double-length set, very much the practice for jazz superstars of the time! The format is familiar – but the liveness gives the album a slightly different feel than their studio sets – a sound that echoes out ... LP, Vinyl record album

My Favorite Things
Columbia, 1962. Near Mint-
LP...$14.99
There's plenty of favorite things going on here – the alto of Paul Desmond, piano of Dave Brubeck, bass of Gene Wright, and drums of Joe Morello – that perfect Dave Brubeck Quartet, captured here at the height of their powers! The set's got no gimmicks, no special settings, but the ... LP, Vinyl record album