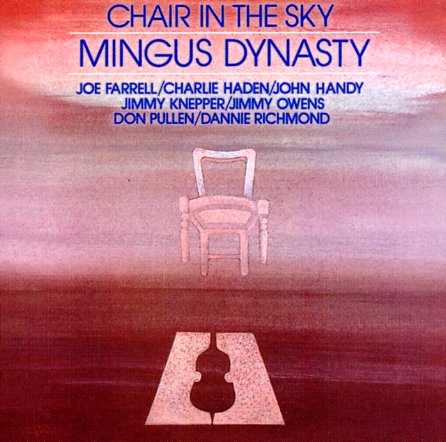 Chair In The Sky

A bold statement from former members of the Charles Mingus group – working here together as a unit after the passing of Mingus, in a set that has some of the best fire and energy of Charles' later years! The tracks here are all Mingus compositions – performed in longish takes that allow for some great solo work from John Handy on alto, Joe Farrell on tenor, Jimmy Owens on trumpet, and Jimmy Knepper on trombone – and rhythm on the session is by the trio of Don Pullen on piano, Charlie Haden on bass, and Dannie Richmond on drums. Titles include "Goodbye Porkpie Hat", "Boogie Stop Shuffle", "My Jelly Roll Soul", and "Sweet Sucker Dance".  © 1996-2020, Dusty Groove, Inc.
(Cover has light wear and a mark from price sticker removal.)