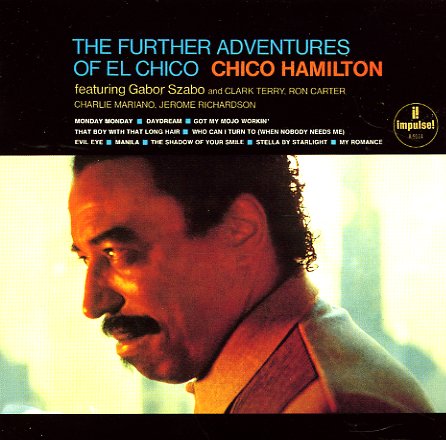 Massively groovy work from Chico Hamilton – one of his standout swingers for Impulse Records in the 60s, and a set that really showcases all the changes in music he'd made for the decade! The set features some wonderful reed work from Jerome Richardson and Charlie Mariano, plus some especially great guitar from Gabor Szabo – a player who was rising to fame in Hamilton's group, but also stands out here with lots of the breezy grooves he'd bring to his own dates for Impulse. Tracks are short, but in a good way that really keeps them focused – and other players who complete the groove include Clark Terry on trumpet and Ron Carter on bass – both of whom nicely pick up Chico's sense of adventure and humor. Titles include "Monday Monday", "Daydream", "Stella By Starlight", "Evil Eye", "Manila", "That Boy With The Long Hair", and "Monday Monday".  © 1996-2021, Dusty Groove, Inc.
(Mono orange & black pressing with Van Gelder stamp/LW etch, includes the Impulse inner sleeve. Cover has light surface wear and a small cutout hole.)