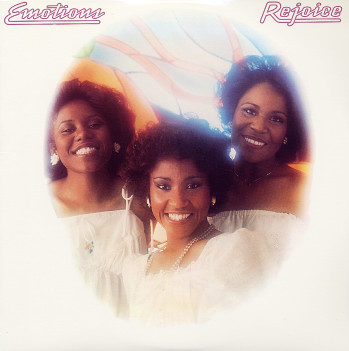 A huge hit for both The Emotions and Maurice White – whose Kalimba Productions handled this album in the same hit mode they'd been using for Earth Wind & Fire! There's a polished, soaring bounce her that definitely shows the Earth Wind & Fire touch – and which takes the girls miles from their rougher, rootsier soul of the Stax/Volt years – yet like all the best EWF records of the time, the sound is also plenty soulful, with lots of righteous undercurrents. The album includes the group's wonderful track "Don't Ask My Neighbors", a heavenly tune that builds on a long tradition of sweet female soul from Chicago; the super-huge "Best Of My Love", a hit on dancefloors and radios for years to come – and many other nice numbers like "Blessed", "How'd I Know That Love Would Slip Away", and "Key To My Heart".  © 1996-2021, Dusty Groove, Inc.
(Includes the printed inner sleeve. Cover has some wear, aging and a bit of clear tape on the back.)

New Affair
Columbia, 1981. Near Mint-
LP...$7.99
Post-disco work from The Emotions – breaking free a bit here from the Earth Wind & Fire influence, and grooving nicely with a sweet 80s feel! The girls' voices are still quite wonderful – some of the deepest harmonies in the female soul world at the time – and the tunes kick ... LP, Vinyl record album

All 'N All
Columbia, 1977. Very Good Gatefold
LP...$24.99 (CD)
Genius, pure genius! It was hard for Earth, Wind & Fire to go wrong at this point – and the album's a stellar blend of jazz, funk, and soul, all done in that perfect style they'd hit by the mid 70s. And even though this one was a monster album, of the type that you see in everyone's ... LP, Vinyl record album