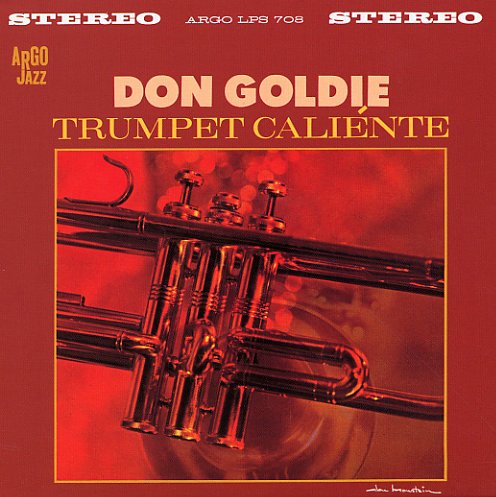 Easily our favorite album ever from trumpeter Don Goldie – a record that really steps past his other sides, thanks to an excellent group! Players on the album are soul jazz heavyweights all the way through – with Leo Wright on alto and flute, Patti Brown on piano, Ben Tucker on bass, and Ray Barretto and Willie Rodriguez on percussion, giving the whole set a nice Latin swing! The "Caliente" in the set is all on the top of Goldie's sparkling trumpet lines – counterpoised nicely with the "bottom" of Tucker's bass and Brown's piano – and the session swings with a good earthy groove that we really love. Titles include the great samba swinger "I Hear A Rhapsody", plus "Goldie's Thing", "Fast Thought", and "Nightingale".  © 1996-2022, Dusty Groove, Inc.
(Mono beige label promo with deep groove. Cover has some surface wear and aging, with a name written in marker in front.)

Dodo's Back!
Argo, 1961. Near Mint-
LP...$34.99
A wonderful later album from pianist Dodo Marmarosa – quite possibly his greatest record ever! The set's an obscure "comeback" date recorded in Chicago for Chess in the early 60s – a trio session with Richard Evans on bass and Marshall Thompson on drums – both working ... LP, Vinyl record album

Transition
Groove Merchant, 1974. Very Good+ Gatefold
LP...$9.99
A mixed bag of work from Buddy and Hamp – part straight jazz, and part sweet electric funk! The first two-thirds of the album features Rich and Hampton with Terry Wilson on piano, Zoot Sims on tenor, and George Duvivier on bass – grooving hard in that open-ended way of some of Hampton's ... LP, Vinyl record album