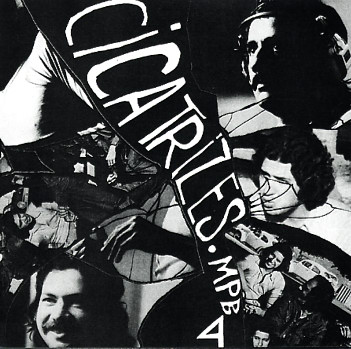 A great album by MPB-4, and one that shows them absorbing a lot of psychedelic influences, and applying them to the arrangements of their unique baroque vocal style. The record has an amazing spacey feel in its best parts – with an approach that certainly owes something to the contemporary work of Edu Lobo, and other Brazilian composers who were pushing the boundaries of pop music. Plus, the whole thing's housed in a great cover, with a fragmented image of the band. Titles include "Faz Tempo", "Ultima Forma", "Cancao De Nana", "Bom Dia, Boa Tarde, Boa Noite", "Partido Alto", and "Viva Zapatria".  © 1996-2022, Dusty Groove, Inc.
(Original pressing – in a heavy gatefold cover!)

Palhacos & Reis
Philips (Brazil), 1974. Very Good+
LP...$19.99 29.99
A great album by this legendary Brazilian vocal group, and one that proves that they were still evolving their style nicely in the 70s. Some of the tracks feature the funky samba style that was showing up in other Brazilian recordings of the time, but the best bits have compilicated arrangements, ... LP, Vinyl record album