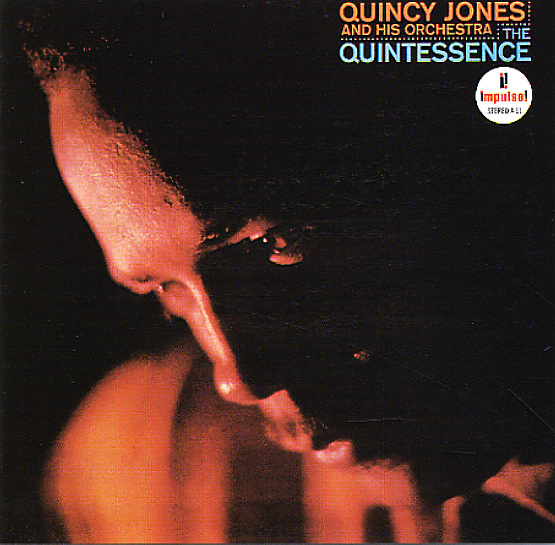 Also available
Quincy Jones — Quintessence ... CD 4.99
A very soulful set of big band material from Quincy Jones – recorded during that tight early 60s period when his arrangements just couldn't fail! The album's his only session for Impulse, and it's got a slightly deeper style than his work from the time for Mercury – a bit more sophisticated, with nice modern touches that take the tunes in surprising directions. Part of the greatness of the set lies in the players – as the album features work by Curtis Fuller, Thad Jones, Stu Martin, Freddie Hubbard, Patty Brown, Phil Woods, and Jerome Richardson – and titles include "Robot Portrait", "Hard Sock Dance", "The Twitch", and "For Lena & Lennie".  © 1996-2022, Dusty Groove, Inc.
(Orange & black label stereo pressing with RVG Stereo stamp. Cover has a half split top seam with some tape remnants.)

Gula Matari
A&M, 1970. Very Good+ Gatefold
LP...$14.99
A real step forward for Quincy Jones – a record that really shows the jazzman moving into sophisticated new territory – a sound that's just right for the CTI generation! The album's got a vibe that's a bit similar to Quincy's Walking In Space album, but it's a lot deeper too – ... LP, Vinyl record album

Alfie
Impulse, 1965. Near Mint-
LP...$36.99
A beautiful soundtrack to the dark British comedy of the same name – starring a young Michael Caine! You might expect it to be a bit schmaltzy, but it's pure jazz all the way through, and features strong inside playing by Rollins over lively orchestrations by Oliver Nelson – filled ... LP, Vinyl record album