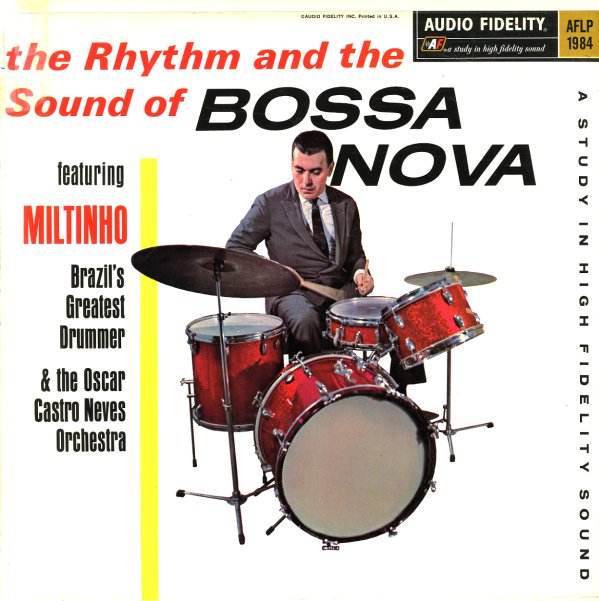 Rhythm & The Sound Of Bossa Nova

An excellent album of hard bossa cuts – played by drummer Antonio Da Souza, aka Miltinho, aka Milton Banana, with backing by Oscar Castro Neves! The band is a quartet led by Oscar Castro-Neves – with some nice piano by him, and some excellent alto work by the great Leo Wright! The record's a prime example of the excellent style of Banana, Joao Gilberto's favorite drummer – in that it's extremly lively, and all over the kit, with sort of a melodic drumming component that's perfect for bossa nova. Titles include "Influencia Da Jazz", "Bossa Nova Blues", "O Apito No Samba", "Boato", and "Nao Faz Assim". Quite rare, too!  © 1996-2021, Dusty Groove, Inc.
(Mono gold label pressing. Cover has light wear and aging, a bumped corner, and a half split top seam on the spine side.)

Organ – Jazz Samba – Percussion
Audio Fidelity, 1963. Very Good+
LP...$11.99
Very groovy album of bossa nova organ tracks – with a sound that's similar to Walter Wanderley, Ed Lincoln, or other 60's Brazilian organ players. Truthfully, most of these tracks probably have more of a samba sound than a bossa one, but it's light and airy, and with a good jazzy groove that' ... LP, Vinyl record album