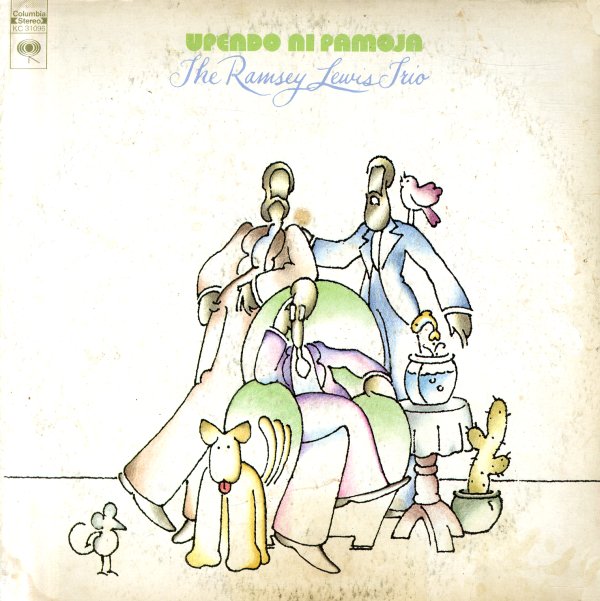 Sublime electric work from Ramsey Lewis! Ramsey's working here with his hip 70s group that included Morris Jennings and Cleveland Eaton, and he's playing some fantastic electric piano – a blend of funky grooves and soulful spiritualism, stripped down into a sound that's one of his leanest and cleanest of the decade! The album's got some great funky covers, like "Collage", "Slipping Into Darkness" and "People Make the World Go Round" – plus the nice groover "Upendo Ni Pamoja".  © 1996-2021, Dusty Groove, Inc.
(Cover has some wear, aging, a sticker remnant, a bit of clear tape on the spine and a lightly bent corner.)

Jazz Meets The Bossa Nova
Columbia, 1962. Very Good+
LP...$11.99
Paul Winter's classic sextet is recorded here in both Rio and New York – one of three different sessions that Winter cut for Columbia in the 60s – all records that explore his own love of the bossa at a time when it was coincidentally very good business to be doing so! Tracks are light ... LP, Vinyl record album

Tokyo Concerts
Columbia, 1963. Near Mint- 2LP Gatefold
LP...$49.99
Rare live material by Monk – recorded in Tokyo in 1963, and featuring the classic Columbia quartet with Charlie Rouse on tenor, Butch Warren on bass, and Frankie Dunlop on drums. Rouse is especially wonderful, and he gets a lot of freedom on the record to work out these complicated solos ... LP, Vinyl record album

Dave Digs Disney
Columbia, 1957. Near Mint-
LP...$29.99 (CD...$11.99)
Dave Digs Disney – and hence, so do we! The album's one of the first to ever pay tribute to the great compositions heard in Disney films – and it features the magical sound of the Brubeck Quartet, turned upon a host of familiar numbers, and transforming them into longer vehicles for ... LP, Vinyl record album

Mysterious Traveller
Columbia, 1974. Near Mint-
LP...$14.99
A new sense of focus in the Weather Report sound – that building, soaring groove that would become the group's trademark in the mid 70s – offered up here in one of it's first and finest examples! The approach is one to describe accurately on paper – but which is instantly ... LP, Vinyl record album