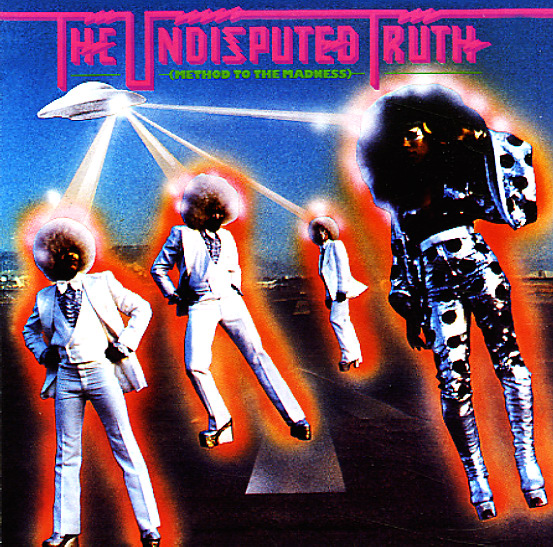 Method To The Madness

A killer classic from the second chapter of the Undisputed Truth – that time when the group stepped away from their Motown home, and followed producer/creator Norman Whitfield to his own label in California! The shift of record companies also marks a cool shift in styles too – an approach that still has all the bold, bassy elements you'd know from the earlier hits – but one that also has some fuller, more cosmic elements too – which are hinted at by the image on the cover! The set begins with a weird electronic spoken number that's almost experimental – then brings up the bass for a bit of heavy funk, while also using electric elements in a way that really points the way to sounds that other big funk groups would cop at the start of the 80s – but which really sound fresh here in the hands of Undisputed Truth. Titles include "Sunshine", "Take A Vacation From Life (And Visit Your Dreams)", "Life Ain't So Easy", "You + Me = Love", "Cosmic Contact", "Hole In The Wall", and "Let's Go Down To The Disco".  © 1996-2021, Dusty Groove, Inc.
(Cover has ring and edge wear, a bent corner, and a tracklist sticker and initials in marker on back.)

Undisputed Truth
Gordy, 1971. Very Good
LP...$16.99
The amazing debut of Undisputed Truth – one of the coolest new Motown groups of the 70s – and one of the few that really continued the experimental legacy of the label in the late 60s! As with the Temptations during their psychedelic years, Undisputed Truth are handled by superproducer ... LP, Vinyl record album

In Full Bloom
Whitfield, 1977. Near Mint- Gatefold
LP...$14.99
A big one for Norman Whitfield – who found in Rose Royce what he'd been lacking for years – a hit group ready to handle a number of styles, all well, and all with an adventurous style that would break them past the legions of lackluster funky soul groups of the late 70s. The record ... LP, Vinyl record album

Boogie Down USA
TSOP, 1975. Very Good+
LP...$5.99
One of the most successful albums cut by People's Choice during the 70s – and a record that shows them making the same progression from funk to disco as other groups of the time, like BT Express. Yet despite the easily imagined disco that the title might indicate, the album's actually got ... LP, Vinyl record album