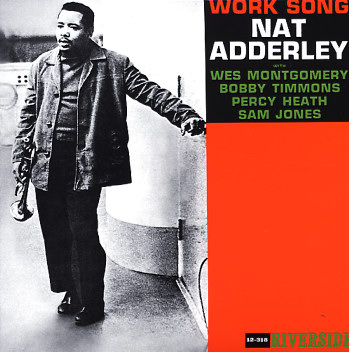 When it comes to soul jazz, you can't get any more classic than this! The title was one of the biggest jazz hits of the 60s – covered by countless other artists, but presented here in all its original brilliance in a group led by its composer, a young Nat Adderley! At the time of the record, Nat was making plenty big waves in the combo of brother Cannonball – but this set has him stepping out strongly as a leader – borrowing Bobby Timmons, Sam Jones, and Louis Hayes from Cannon's group – and also adding in Wes Montgomery on guitar and additional bass and cello work from Keeter Betts and Percy Heath. The tracks are all tight as a drum – and the record features seminal versions of "Work Song" and "Sack O Woe" – as well as the numbers "Scrambled Eggs", "Pretty Memory", and "Fallout" – all great!  © 1996-2021, Dusty Groove, Inc.
(Japanese pressing, with obi – Victor SMJ 6041.)

Hummin'
Little David, 1976. Near Mint-
LP...$6.99
A really brilliant little record from Nat Adderley – one that shows him shaking off the groove gotten from brother Cannonball, and finding some great space all on his own! The setting here is tight and funky – at a level that's a bit more arranged than a small combo soul jazz session, ... LP, Vinyl record album