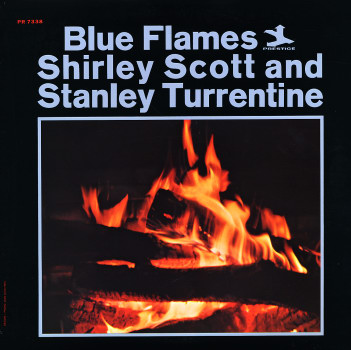 One of the real classics from the team of Stanley Turrentine and Shirley Scott – a session that kicks up Shirley's groove on Prestige a fair bit, by adding in some incredible tenor from then-husband Stan! Turrentine's tone at the time is wonderful – biting, well-placed, and always with a rhythmic pulse that seems to inspire stronger lines and bolder organ work than Scott sometimes brought to the table on other Prestige trio sessions. Backing is by Bob Cranshaw on bass and Otis Finch on drums – but the real stars of the show are Stanley and Shirley, who could have easily done the whole thing on their own! Titles include "The Funky Fox", "Hip Knees An' Legs", "Five Spot After Dark", and "Grand Street".  © 1996-2021, Dusty Groove, Inc.
(Mono blue trident label pressing with Van Gelder stamp. Cover has moderate wear, with some splitting and a wide piece of masking tape along the bottom seam.)