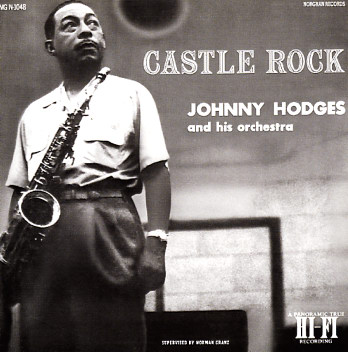 An undisputed Verve classic, and proof that Johnny Hodges could make damn good records away from Duke Ellington! The set features a number of small groupings of Ellington players – like Al Sears, Billy Strayhorn, Lawrence Brown, and others – but the sound is quite different than with the Duke – really jamming hard, with almost an R&B overtone at times – and a strong focus on the hard-edged Hodges alto sax! The classic "Castle Rock" is a wailer composed by Sears – and other tracks are all great too – including "Jeep Is Jumping", "Wham", "Sideways", "You Blew Out The Flame In My Heart", and "My Reward".  © 1996-2021, Dusty Groove, Inc.
(Verve Records Inc pressing with trumpeter logo and deep groove. Cover has completely split seams with yellowed tape remnants, some surface wear, and small tear in the back panel.)