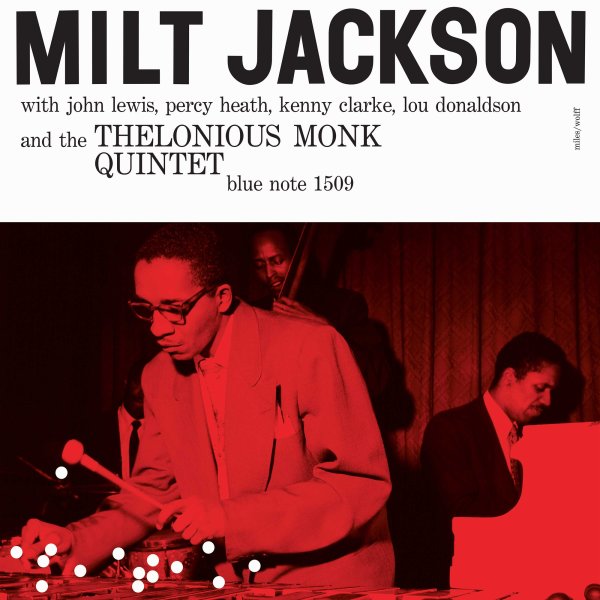 Milt Jackson (Blue Note 1509 aka Wizard Of The Vibes)

Wicked early work from Milt Jackson – a record that's got a lot more of an edge than some of his later work with the Modern Jazz Quartet – a near-perfect modernist bop sound that's every bit the best side of Blue Note in the early 50s! The package brings together material from a few different sessions – some originally on 10" LPs – and the core of the material features Jackson in the company of pianist Thelonious Monk, on some tracks that also feature Sahib Shihab on alto sax! John Lewis plays piano on another batch of tracks that are essentially the early MJQ lineup, but with Lou Donaldson on alto too – so they swing with a bit more soul than you might expect. Titles include "Bag's Groove", "On The Scene", "Willow Weep For Me", "Criss Cross", "Evidence", "Tahiti", "Misterioso", "Four In One", and more.  © 1996-2023, Dusty Groove, Inc.
(70s black b label pressing. Cover has light wear and a cutout notch.)

Big Bags – Milt Jackson Orchestra
Riverside, 1962. Very Good
LP...$9.99
A sweet larger group session from vibist Milt Jackson – proof that he was really trying to stretch his wings, and get into new things during the 60s! The set's got Milt working with some great help from Tadd Dameron and Ernie Wilkins on larger group arrangements – nicely swinging ... LP, Vinyl record album

Plenty, Plenty Soul
Atlantic, 1957. Near Mint-
LP...$11.99
Plenty plenty soul here – as Milt Jackson's moving away from the Modern Jazz Quartet, and working with a great group of players that really expand his sound! The session's a bit like some of Milt's soul jazz work for Riverside and other labels – in that it's got rhythms, timings, and ... LP, Vinyl record album

Ballad Artistry Of Milt Jackson
Atlantic, 1959. Very Good
LP...$7.99
A beautiful setting for the vibes of Milt Jackson – a record that has his sublime chromatic sound stepping out in front of fuller orchestrations from Quincy Jones – never overdone, but with just the right sort of soulful focus to send Milt over the top! The album's an early example of ... LP, Vinyl record album

Olinga
CTI, 1974. Very Good+ Gatefold
LP...$19.99
Milt Jackson's third album for CTI – part of a wonderful run that really helped him redefine his sound in the 70s! The album's got the electric approach you'd expect from the label – a great change from the sound of Jackson in the Modern Jazz Quartet, and a surprisingly great setting ... LP, Vinyl record album