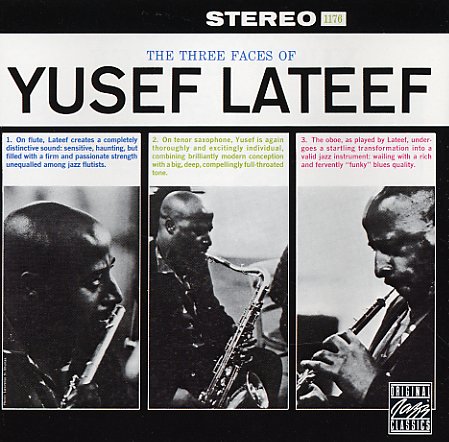 Sublime work from Yusef Lateef – and proof that he could be exotic and swinging at the same time! The three "faces" of the set are Lateef's work on tenor, flute, and oboe – each of which get a few tracks to themselves – as Lateef works with a core Detroit group of Hugh Lawson on piano, Herman Wright on bass, and Lex Humphries on drums – to further refine the already great sound of his earlier albums for Savoy! Tunes are set up in such a way as to vary the instrumentation without varying the mood too much – making for a record with many voices, but a really unified sound overall – and one that's incredibly soulful on the best numbers. Ron Carter joins the group on cello on a few tracks, and Lawson even plays a bit of celeste on the set as well. Titles include "Lateef Minor 7th", "Salt Water Blues", "Adoration", and "Quarantine".  © 1996-2020, Dusty Groove, Inc.
(Black label stereo Bill Grauer Productions pressing, RLP 1176, with microphone logo and deep groove. Cover has a silver block at the top right corner over the logo, and name in pen written on back.)