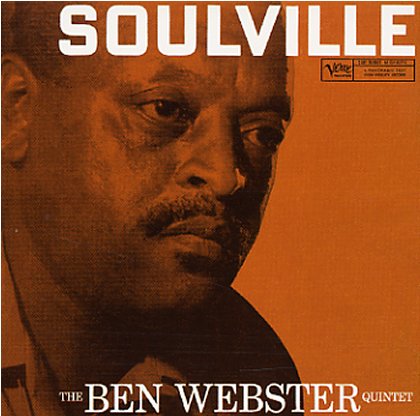 Also available
Ben Webster — Soulville ... CD 3.99
About as classic as you can get for Ben Webster on Verve Records – a nicely mature, nicely laidback session that really captures the energy promised in the title! The sidemen are all in an easygoing, soulful mode – Oscar Peterson on piano, Herb Ellis on guitar, Ray Brown on bass, and Stan Levey on drums – and Ben blows these beautifully deep, well-crafted lines on tenor over the top – always with that raspy tone that had already influenced a generation, but which hardly ever got a better showcase than this! Titles include "Time On My Hands", "Where Are You", "Soulville", "Late Date", and "Ill Wind".  © 1996-2022, Dusty Groove, Inc.
(Verve Inc pressing with trumpeter logo and wide deep groove. Vinyl is nice and clean – cover has a bit of tape in one corner, but is nice too.)

Big Ben Time
Fontana (UK), 1968. Very Good
LP...$14.99
Great late work from the mighty Ben Webster – a set recorded overseas in London – with Dick Katz on piano, Spike Heatley on bass, and Tony Crombie on drums. Tracks are short and lively, and that amazing Ben Webster tone is alive and well – on titles that include "The Jeep Is ... LP, Vinyl record album

Live At Pio's
Enja, Early 70s. Sealed
LP...$14.99 (LP...$39.99)
A great small club date from Ben Webster – different than some of his European concerts of his final years, in that this one was done at a lounge in Rhode Island, and maybe has a bit more bite and focus overall! The tracks are short, and Webster gets superb rhythm accompaniment from the trio ... LP, Vinyl record album