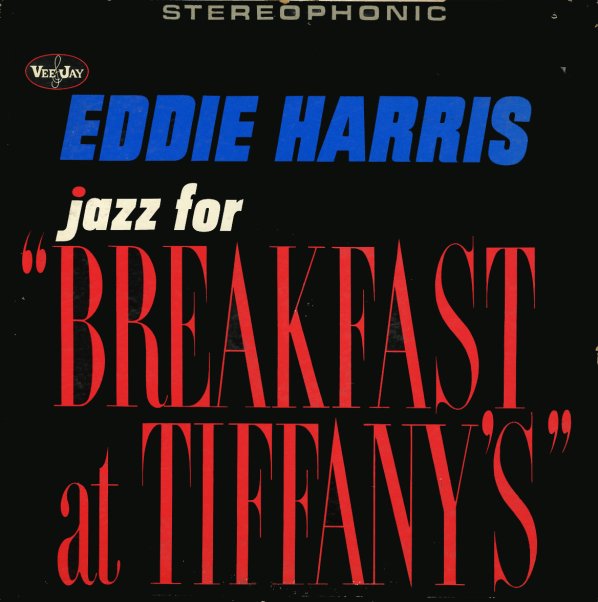 Jazz For Breakfast At Tiffany's

Great jazz version of Henry Mancini's famous score – played by Eddie Harris and his killer Chicago group from the old days – a very cool lineup that includes the young Charles Stepney on vibes, plus Willie Pickens on piano! There's a great bunch of tracks here besides the hit "Moon River" – like "Sally's Tomato", "Mr Yunioshi", "Latin Golightly", and "The Big Heist" – and Eddie and crew do an excellent job with the music, opening it up more than Mancini's recording, but still retaining all of its humor and warmth!  © 1996-2021, Dusty Groove, Inc.
(Mono rainbow label pressing with deep groove.)

Mighty Like A Rose
Vee Jay, 1961. Very Good
LP...$9.99
Although Exodus to Jazz was probably the biggest album of Eddie's career, we've always been a bit more partial to this excellent LP, a terrific document of Eddie's work from his early days on the Chicago jazz scene. Featuring Eddie's good early group with Willie Pickens on piano, Jo Dorio on ... LP, Vinyl record album

Instant Death
Atlantic, 1972. Very Good
LP...$14.99
Damn great work from the amazing Eddie Harris – a record that's got a perfect blend of jazz and funk, but still holds onto more righteous elements too! Eddie's using his electric sax in a really great way – not as a gimmick at all, but as a way of linking both the soulful and ... LP, Vinyl record album

Empyrean Isles
Blue Note, 1964. Very Good
LP...$39.99
A lyrical masterpiece from the young Herbie Hancock – and a record that's really special for so many different reasons! First, the songs are really long and open – even more so than some of Hancock's other work – with a quality that's balanced between his soul jazz roots, and ... LP, Vinyl record album

Cleveland Style
EmArcy, Mid 50s. Very Good
LP...$9.99
Quite possibly the best of Cleveland's albums for Mercury during the 50s – a tight hardbop set of tracks recorded with a septet that includes Art Farmer on trumpet, Benny Golson on tenor, Wynton Kelly on piano, and Charlie Persip on drums. Tracks are more open-ended than on some of Cleveland' ... LP, Vinyl record album