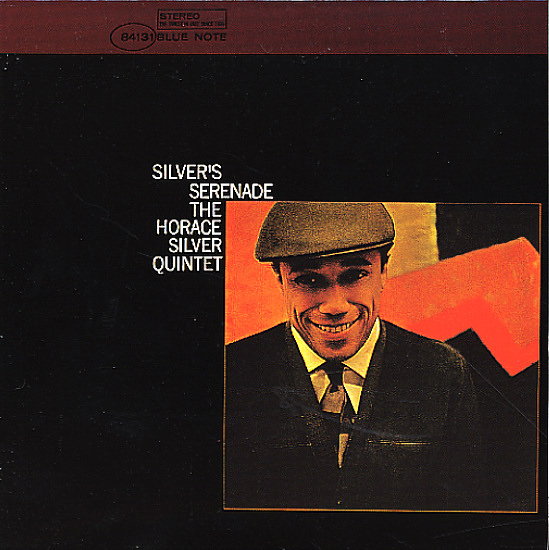 A bit less well-known than some of the real Horace Silver classics on Blue Note – but an incredible record that shows the Silver Quintet at all its lyrical best! The record is a masterpiece of original voicings from Horace – not just in the unique tunes he penned for the set, but also in the strong direction he gives the group – a well-knit lineup that includes Blue Mitchell on trumpet, Junior Cook on tenor, Gene Taylor on bass, and Roy Brooks on drums – all coming together with some of the most fluid, most intuitive energy of any combo of the time! The melodic themes are structured loosely, so that Mitchell, Cook, and Silver can extrapolate on beautifully-spun solos – and titles include "Sweet Sweetie Dee", "Nineteen Bars", "The Dragon Lady", "Silver's Serenade", and "Let's Get To The Nitty Gritty".  © 1996-2022, Dusty Groove, Inc.
(Great Japanese EMI pressing, with insert – BN 4131.)

Silver's Blue (Columbia Special Products)
Columbia, 1956. Very Good+
LP...$14.99
Killer early work from Horace Silver – and a rare non-Blue Note session from the 50s! The album's Horace's only date for Columbia, and it's got a feel that's similar to some of the Jazz Messengers' hardbop recordings for the label at the time – cooking with a soulful intensity at the ... LP, Vinyl record album

Silver 'N Brass
Blue Note, 1975. Very Good+
LP...$14.99 24.99
A beautifully soulful set from Horace Silver – hardly the "with brass" session you might guess from the title, and instead a well-integrated album that really showcases a new level of arranging genius from Horace! The set is heavy on hip horns – with work from Oscar Brashear, ... LP, Vinyl record album

Cape Verdean Blues
Blue Note, 1965. Very Good
LP...$34.99 (CD...$6.99)
A classic set from Horace Silver – one in which his quintet is expanded by some great guest work from trombonist JJ Johnson! Johnson's at the height of his 60s powers here – blowing with that lean, soulful style that always made any record sparkle – and although he's only on half ... LP, Vinyl record album

You Gotta Take A Little Love
Blue Note, 1969. Very Good Gatefold
LP...$19.99
A great late 60s gem from pianist Horace Silver – and a great bridge between his earlier soul jazz for Blue Note, and some of his more righteous work to come in the 70s! At one level, the sound here steps off from classics like Serenade To A Soul Sister or The Jody Grind – but at ... LP, Vinyl record album

Night At Birdland Vol 1
Blue Note, Late 50s. Very Good+
LP...$29.99
A wonderfully hard-storming set – and a record that not only firmly put the Jazz Messengers on the map, but also set a whole new standard for live jazz recording! The group here is the early version of the Messengers – almost co-led by drummer Art Blakey with pianist Horace Silver ... LP, Vinyl record album

Song Of Singing
Blue Note, 1970. Very Good+
LP...$14.99
A key album in Chick Corea's shift from Latin jazz to arch-modern – recorded with Circle bandmates Dave Holland on bass and Barry Altschul on drums, and done with a free sound that's quite unusual for Blue Note at the time! Chick's out on this one – way out – in that free mode of ... LP, Vinyl record album

Peckin' Time
Blue Note, 1958. Near Mint-
LP...$59.99 (CD...$12.99)
One of the first great pairings of Hank Mobley and Lee Morgan – a trumpet/tenor team that was always a treasure, no matter what the setting! This one's a pretty open-ended blowing date – one that gives both horn players plenty of room to stretch out, in a setting that's filled with ... LP, Vinyl record album