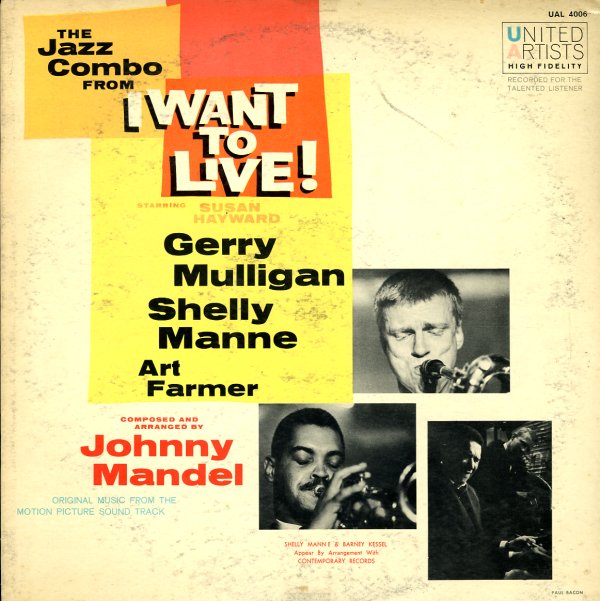 Jazz Combo From I Want To Live!

This is the small combo recording of tracks from the legendary jazz score to I Want To Live! Although not featured that prominently in the film, the band of Gerry Mulligan, Art Farmer, Bud Shank, and others were a pretty tight little group – even though it was strange to see this west coast whitebread group playing in scenes of jazz/crime/evil. The record's a nice one, though, and features some of the livelier playing you'll hear from the players. Tracks are long, and titles include "Black Nightgown", "Night Watch", and the raging "Theme From I Want To Live".  © 1996-2022, Dusty Groove, Inc.
(Mid 70s Japanese UA pressing. Cover has light wear.)

La Menace (80s pressing)
DRG, 1977. Very Good+
LP...$5.99
Obscure work from Gerry Mulligan – and some of his best of the 70s! The record is a soundtrack for a French film starring Yves Montand, and the soundtrack was handled by Mulligan with assistance from Don Elliott – who brings in a funky style that's quite different than you'd expect ... LP, Vinyl record album

Mainstream Of Jazz
EmArcy, 1956. Very Good+
LP...$19.99
Gerry Mulligan's still far from the mainstream of jazz on this sweet little set – a great date that expands nicely from the mellower styles of the Pacific Jazz years – expanding the group a bit, with some really great results! In addition to Mulligan's usual baritone sax, Gerry also ... LP, Vinyl record album