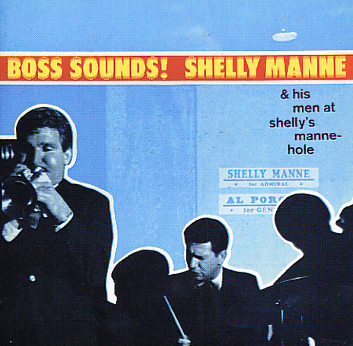 One of Shelly Manne's best records of the 60s – largely because the group's so great! Altoist Frank Strozier was playing with Shelly at the time, and his rich talents on the alto make the record almost worth seeking out for him alone – because here, Strozier's opening up his sound a lot more than in the early days – and going for strange phrasings, sharp edges, and other unusual twists that really add a lot more spice to the set than you might expect! The rest of the group features Conte Candoli, Russ Freeman, and Monty Budwig – and in a way, the record takes off from the energy of Shelly's classic Blackhawk sessions, but with even a bit more tightly dynamic sound. Titles include "Frank's Tune", "You Name It", "Margie", and "Idle One".  © 1996-2020, Dusty Groove, Inc.
(Green & blue label stereo pressing. Cover has a cutout notch and a spot of adhesive residue.)

My Fair Lady (Contemporary)
Contemporary, 1956. Very Good+
LP...$6.99 (CD...$2.99)
A key early entry in the "jazz meets Broadway" genre – and a record that was so successful, it went onto inspire countless imitations! Shelly Manne's working here in a lightly playful trio setting – alongside Andre Previn on piano and Leroy Vinnegar on bass, in a reading of ... LP, Vinyl record album