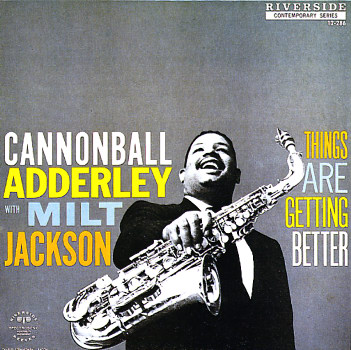 An album that definitely lives up to its title – given the great change and evolution in the style of Cannonball Adderley's music – definitely pointed towards the soul jazz fame to come in the 60s! The group here has Adderley's alto in the company of some all-stars who may not be his regular group, but who definitely help keep the whole thing at a top-shelf level throughout – a quintet that features Milt Jackson on vibes, Wynton Kelly on piano, Percy Heath on bass, and Art Blakey on drums. There's still a few echoes of Cannon's earlier bop recordings, but the sound is also moving towards the new modes to come – especially on the classic title cut "Things Are Getting Better". Other cuts include "Just One Of Those Things", "Sounds For Sid", "Groovin High", "Serves Me Right", and "Blues Oriental".  © 1996-2022, Dusty Groove, Inc.
(Small blue label Bill Grauer Productions pressing, RLP 12-283, with microphone logo and deep groove. Cover has some heavy edge wear, split top seam with some peeling, and some red pen and discoloration from age in back.)