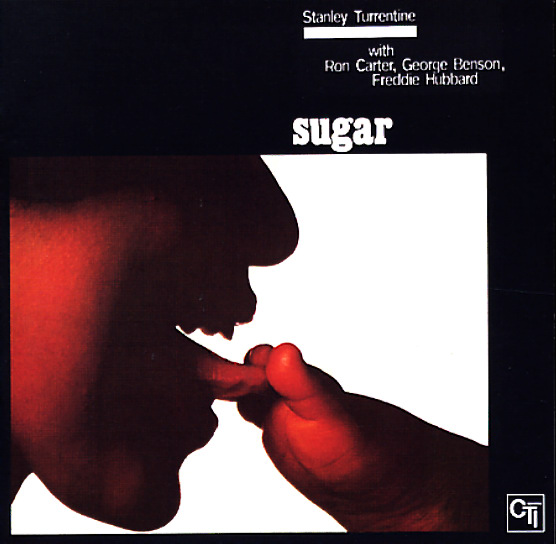 A big hit for Stanley Turrentine – and a pretty darn nice record of extended groovers, with a harder sound than you might expect from the tongue-licking cover, and a title of Sugar! The record's only got three cuts – one of them Stanley's famous version of "Sugar", the other two pretty nice ones ("Sunshine Alley" and "Impressions") – all done in a mode that sounds a lot more like harder Prestige sessions from the same time – that great period when the label was stretching out with some electric piano jazz funk. Butch Cornell's on organ, and his work on the album's part of its success, as is the nice hard drumming of Billy Kaye, who actually hits an Idris Muhammad-ish groove at parts! Titles include "Sugar", "Sunshine Alley", and "Impressions".  © 1996-2021, Dusty Groove, Inc.
(Original gatefold pressing. Cover has light wear.)

Look Of Love (Applause version)
Blue Note/Applause, 1968. Near Mint-
LP...$8.99
Stanley Turrentine's a hell of a soloist in a large ensemble setting – and there's possibly no better place to hear that talent at work than on this classic 60s date for Blue Note! The format's a bit different than other Turrentine records of the time – no small group romping, nor ... LP, Vinyl record album

Look Of Love
Blue Note, Late 60s. Near Mint- Gatefold
LP...$29.99
Stanley Turrentine's a hell of a soloist in a large ensemble setting – and there's possibly no better place to hear that talent at work than on this classic 60s date for Blue Note! The format's a bit different than other Turrentine records of the time – no small group romping, nor ... LP, Vinyl record album