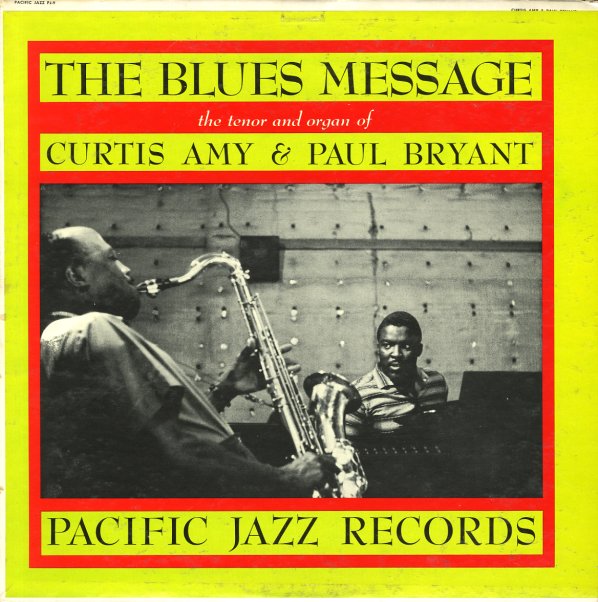 Great LA soul jazz session featuring the deep Texas tenor of Curtis Amy and the funky organ of Paul Bryant! Also present is Roy Brewster, the great, under-recorded LA valve trombonist, whose playing here gives the session a nice round bottom. 5 long cuts, with earthy, bluesy solos, and a very swinging rhythm section. Titles include "Searchin", "Blues Message", "This Is The Blues", and "Goin Down, Catch Me A Woman".  © 1996-2021, Dusty Groove, Inc.
(Mono black & silver label pressing with deep groove. Cover has some wear and aging, clear tape holding the bottom seam, with a small name written in pen on front and in marker on back.)

Swingin' New Big Band
Pacific Jazz, 1966. Near Mint- Gatefold
LP...$9.99
A hard and heavy side from Buddy, and true to his reputation and the title of the LP, he comes out swinging! The set features a top notch mid 60s group, and from the sound of the numbers on this set, ol' Buddy did need to hand out any of his famous lectures on the bus afterwards, with some crisp ... LP, Vinyl record album

Feelin Kinda Blues
Pacific Jazz, Mid 60s. Near Mint-
LP...$9.99
Ahhh . . . Gerald Wilson at the height of his powers – recording here in a mode that could never miss! The group's a jazz orchestra, but it's filled with some of the hippest cats on the west coast in the 60s – soulful soloists who include Anthony Ortega on flute and alto, Curtis Amy on ... LP, Vinyl record album