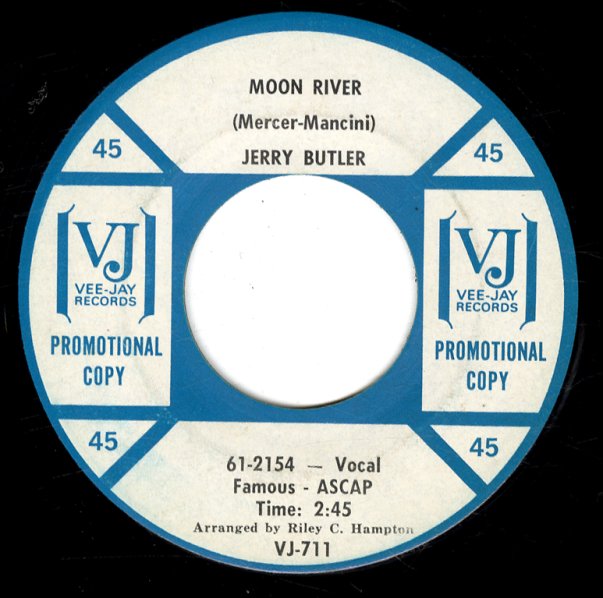 Moon River/Make It Easy On Yourself

Although Jerry Butler got his start singing some of Curtis Mayfield's early work, the geniuses at Vee Jay had the sharp idea of shopping for a few songs in New York, and they managed to come up with these two gems, both of which are classics from Jerry's second wave of hits! Believe it or not, "Moon River" was the first pop version ever recorded (according to Mancini himself), and it's delivered here perfectly with fab Riley Hampton arrangements. The flipside features original Bacharach arrangements, and Jerry's rendition will show you how much Scott Walker stole from him!  © 1996-2023, Dusty Groove, Inc.
(Promo copy in a VJ sleeve.)

Twist/Teardrops On Your Letter
King, Early 60s. Very Good
7-inch...$4.99
Two of Hank's early classics! "The Twist" is his first version of the tune – the one that Chubby Checker and others ripped off for bigger cash! "Teardrops On Your Letter" is done here in the first, original version. 7-inch, Vinyl record

You + Me = Love
Whitfield, 1976. Near Mint-
7-inch...$4.99
Post-Motown work by the Undisputed Truth – an uptempo dancefloor burner that still has the group working in a great Norman Whitfield mode – bass bubbling at the bottom, while strings and soul soar over the top! 7-inch, Vinyl record