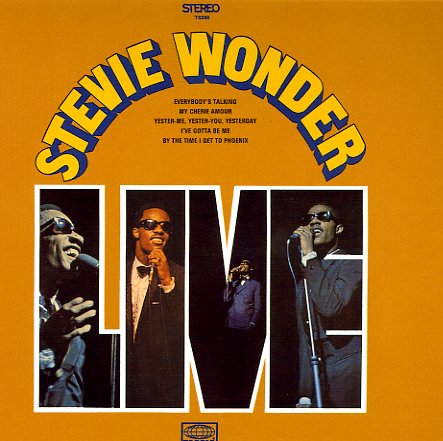 An overlooked gem from Stevie Wonder's pivotal years at Motown – a wonderful live album that's got a great deal of charm, and a few surprising moments! Wonder's really coming into his own here – holding the stage with the maturity of some of the other adult acts on Motown, and stepping easily between his own hits and new versions of 60s work by others – coming across as a consummate entertainer with a great deal of control, and vocals that are even better than a few years back. Our favorite part of the album, though, is this killer 7 minute version of "Ca Purange" – which features an amazing drum solo by Stevie, one that's filled with some massively funky breaks! Other titles include "My Cherie Amor", "Sunny", "For Once In My Life", "Alfie", "Down To Earth", "Shee-Be-Doo-Be-Doo-Da-Day", and "By The Time I Get To Phoenix".  © 1996-2021, Dusty Groove, Inc.
(Cover has some light wear and a bit of fading near one edge – but this is a nice copy overall.)