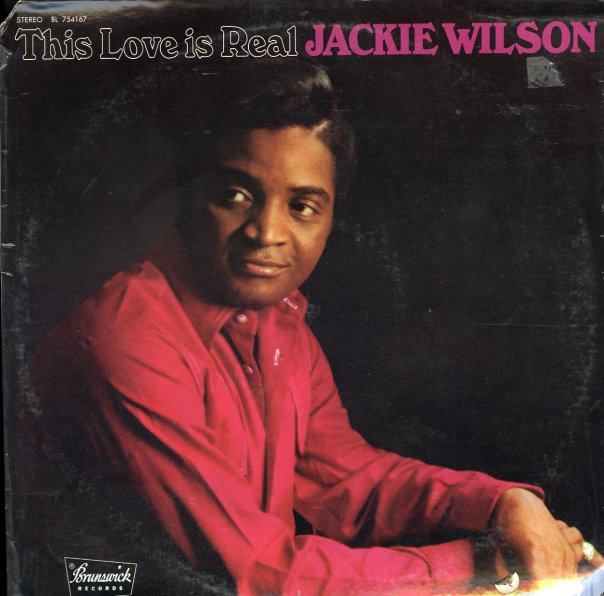 This Love Is Real

Wonderful work from Jackie Wilson's years on the Chicago scene – a time when the singer was able to really find a way to put his excellent vocals to great new use – stretching out here with sublime production from Carl Davis, and backings from the great Willie Henderson! In his early years, Jackie's vocals were great, but the setting wasn't always perfect – yet by the time of his classic album, he's definitely corrected that lack – by working with some sublime studio talents, and a host of great songwriters too. The tunes have this hip style that really lets Wilson loose – not entirely in Curtom mode, but maybe with some of the more mature themes that were also showing up in the work of Gene Chandler or Jerry Butler at the time. Titles include the sublime hit "This Love Is Real (I Can Feel Those Vibrations)" – plus "Think About The Good Times", "Love Changed Her Face", "Say You Will", "Love Uprising", "Let This Be A Letter (To My Baby)", and "Don't Leave Me".  © 1996-2022, Dusty Groove, Inc.
(Cover has a cut corner and surface wear.)

Reet Petite – The Best Of Jackie Wilson
Brunswick/CBS, Mid 60s. Sealed
LP...$14.99
Classic soul from Jackie! The record's an 80s CBS collection of some of his best singles for Brunswick from the 60s – seminal Windy City soul numbers that include quite a few that were penned by Berry Gordy back in Jackie's early days. 12 numbers in all, with titles that include "Lonely ... LP, Vinyl record album

Nobody But You
Brunswick, 1976. Near Mint-
LP...$19.99 29.99
One of the last great albums that Jackie Wilson ever recorded – a sublime set of 70s soul that has some very different backings than before, all a perfect fit for those amazing Wilson vocals! David Van DePitte handled the arrangements – and wonderfully blends together strings and soul ... LP, Vinyl record album

It's All A Part Of Love
Brunswick, Late 60s. Near Mint-
LP...$11.99
A mixed bag of an album from Jackie – a record that features tracks handled in a number of modes, from late 60s Chisoul, to others that are in a ballad or standard style. Arrangers include Johnny Pate, Willie Henderson, Sonny Sanders, and Dick Jacobs – and tracks include "We Have ... LP, Vinyl record album

Jackie Sings The Blues
Brunswick, Early 60s. Very Good- Gatefold
LP...$11.99
One of Jackie's greatest records – and one of his most soulful, too! The album features Jackie doing some great soul versions of bluesy tracks, with backing that's sort of in the style of his other Brunswick records, but which also lets Jackie's rich soulful vocals come right to the ... LP, Vinyl record album

Manufacturers Of Soul
Brunswick, 1968. Sealed
LP...$14.99
A really wonderful collaboration between two very unlikely partners – and a great album that really stands out as some of the best work from both artists in the 60s! Count Basie's group gets hard and soulful on the record – and even a little funky on the best cuts – and Jackie ... LP, Vinyl record album