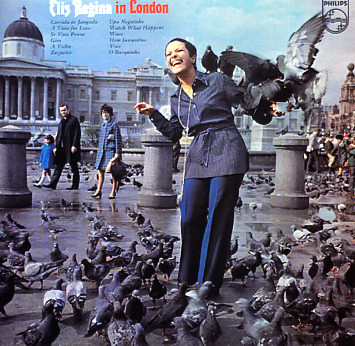 Elis Regina hits the London scene of the late 60s – with amazing results that make the album one of her best from the early years! The style here is still quite bossa-oriented, but backings are done by Peter Knight – who'd worked with Scott Walker and some of the other hip British singers at the time – so the sound's a bit different than Elis' Brazilian records, too. Knight's quite sensitive to Regina's way of interpreting a tune – and he nicely follows the soaring, jazzy vibe that Roberto Menescal had given her at home. But the groove's also a bit more open and fluid too – with some slight Brit Easy touches that Really send the whole album home! Titles include a great version of "Upa Neguinho", plus "O Barquinho", "Zazueira", "Giro", "A Volta", "Corrida De Jangada", "Watch What Happens", and "Wave".  © 1996-2021, Dusty Groove, Inc.
(80s Mexican pressing on Philips. Vinyl has a mark that clicks a bit on "A Time For Love".)