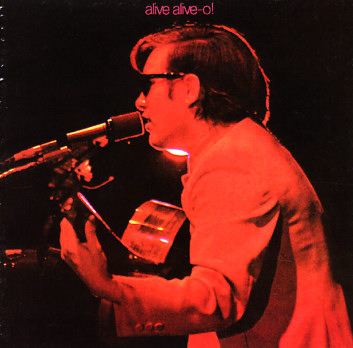 A beautiful little live album from Jose Feliciano – recorded in London at the end of the 60s, with a sound that's often more stripped down than his studio work of the time! Jose's on vocals and guitar, backed by only a bit of bass and percussion – so the record's almost got the intimacy of a solo effort, which is quite astounding – given the obvious size of the concert setting! The double-length nature of the record allows Jose to stretch out a bit more than usual – and take on a nice variety of material that really show his growing talents at the time. Titles include "High Heel Sneakers", "Mama Don't Allow It", "La Entrada De Bilboa", "The Comedy Bit", "Malaguena", "No Dogs Allowed", "Day Tripper", "Black Orpheus Medley", "California Dreamin", "Light My Fire", "Day In the Life", and "El Voh".  © 1996-2022, Dusty Groove, Inc.
(Vinyl is free of major marks but is lightly oxidized and plays with surface noise throughout. Cover has light wear.)