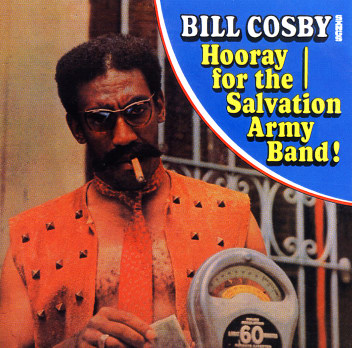 Hooray For The Salvation Army Band!

An early funk album by Bill Cosby – with backing by the Watts 103rd Street Rhythm Band! Bill was pals with Charles Wright and crew in the hip LA of the late 60s, and he was also responsible for bringing the group to Warner Brothers – so the fit here is quite a natural one. The record was also produced by Fred Smith – who handled the Watts Band's albums – and it's got a very similar feel to their classics for Warner from the late 60s – but with Bill Cosby stepping out in front on vocals, in a similar style to Charles Wright. Cosby's singing is often a bit goofy, but works beautifully with the stoned to the bone feel of the group – a madder match than even Charles Wright, especially on the album's "parody soul" cuts. Titles include a classic break version of "Get Out Of My Life, Woman" – plus the titles "Ursalena", "Funky North Philadelphia", "Sunny", and a surprisingly great screaming version of "Sgt. Pepper's Lonely Hearts Club Band".  © 1996-2021, Dusty Groove, Inc.
(Gold label stereo pressing. Cover has ring and edge wear, a split spine, and some sticker spots on front.)

Purple Rain
Warner, 1984. Very Good
LP...$34.99
One of the greatest crossover albums of the 80s – and the record that catapulted Prince very firmly into the mainstream! There's a tightness here that surpasses even that of Prince's early classics for Warner Brothers – an unabashed love of a pop hook that makes for some incredibly ... LP, Vinyl record album

Chaka Khan
Warner, 1982. Very Good+
LP...$3.99
Great stuff – and one of the gems that Arif Mardin produced for Chaka during her immediate solo years after leaving Rufus. Mardin's sweet soulful arrangements are a perfect fit for Chaka's voice – not only on soul tracks like "Tearin' It Up", "Got To Be There", ... LP, Vinyl record album

Headless Heroes Of The Apocalypse
Atlantic, 1971. Near Mint-
LP...$19.99 (LP...$25.99)
A monster album that's gone on to influence a generation – but which was barely recognized at the time! Singer Eugene McDaniels had scored big with some pop hits in the 60s under the name Gene McDaniels – but here, he steps out in a righteous batch of offbeat funk tunes – filled ... LP, Vinyl record album