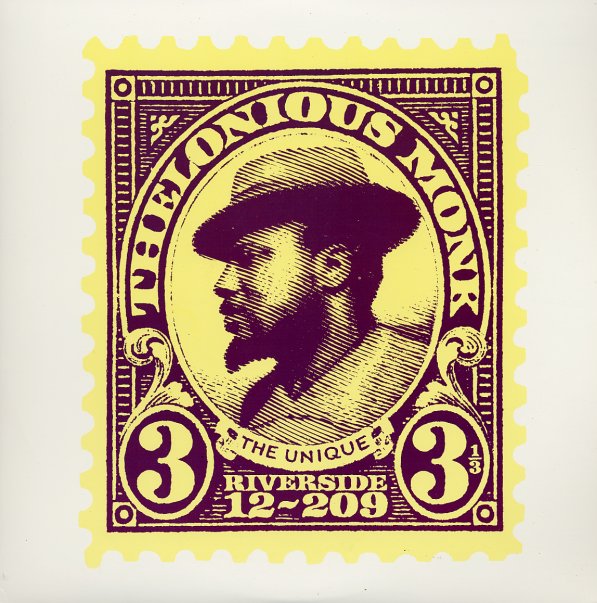 The session's billed as "very personal treatments of great standards" – and it's a great twist on familiar material, all given the Thelonius touch! There's less of Monk's creative composition and angular group arrangements going on here – and instead, the album's almost a rewriting of 40 years of popular compositions, all taken into the modern world of Monk's piano. The group's a trio, with Oscar Pettiford on bass and Art Blakey on drums – and titles include nicely reworked versions of "Just You Just Me", "Memories Of You", "Liza", "Darn That Dream", and "Tea For Two".  © 1996-2022, Dusty Groove, Inc.
(Small blue label Bill Grauer Productions pressing, RLP 12-209, with microphone logo and deep groove. Cover has some ring and edge wear, aging, a split top seam, and small center split in the bottom seam.)

Monkisms (aka Piano Solo)
Picc A Dilly, 1954. Near Mint-
LP...$14.99
Solo recordings with titles including "Round About Midnight", "Reflections", "Smoke Gets In Your Eyes", "Portrait Of An Ermite", "Manganese", "Off Minor" and more. LP, Vinyl record album

Always Know
Columbia, Mid 60s/1979. Very Good+ 2LP Gatefold
LP...$19.99 24.99
Nice 2LP set that brings together a large amount of material by Monk that was recorded during the 60s, but never issued at the time. Most of the material is live, and some of the tracks did come out previously in edited form – but this collection (like so many of the other great Columbia 70's ... LP, Vinyl record album

Big Band & Quartet In Concert
Columbia, 1963. Near Mint- 2LP
LP...$34.99
A unique little album from Thelonious Monk – an early 60s live date that features a really cooking big band, plus some solo and quartet tracks as well! The bulk of the album's played by the big band – an unusual mix of players that includes Phil Woods on alto, Steve Lacy on soprano sax ... LP, Vinyl record album

Freedom Suite Plus
Riverside, 1957/1958. Near Mint- 2LP Gatefold
LP...$19.99
A great reissue that takes Rollins' historic Freedom Suite LP, and adds in a full extra LP's worth of material pulled from scattered sessions on Riverside. The well-annotated set offers a strong look at Rollins during the key 1958 period, when he was really moving into some of his strongest ... LP, Vinyl record album