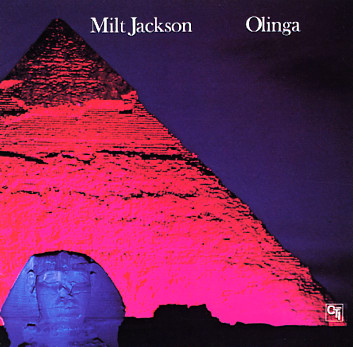 Milt Jackson's third album for CTI – part of a wonderful run that really helped him redefine his sound in the 70s! The album's got the electric approach you'd expect from the label – a great change from the sound of Jackson in the Modern Jazz Quartet, and a surprisingly great setting for his wonderful work on vibes! Milt's laidback style is perfect for the CTI mode – open, flowing, and filled with great tones – matched up here with sax work by Jimmy Heath, bass by Ron Carter, piano from Cedar Walton, and drums by Mickey Roker – a perfect setting to let loose in a way he rarely did on his earlier albums. The whole set's great – and titles include "Lost April", "Rerev", "The Metal Melter", "The Steel Bender", and "I'm Not So Sure".  © 1996-2022, Dusty Groove, Inc.
(Yellow label pressing with Columbia NY stamp, in a non-gatefold cover. Cover has some edge wear and a bumped corner.)

Bags & Brass (aka For Someone I Love)
Riverside, 1966. Near Mint-
LP...$11.99
A surprisingly nice pairing – the vibes of Milt Jackson and some larger horn backings that fall heavy on the trumpet and trombone side of the spectrum! The sound's not nearly as heavy or hokey as you'd expect – thanks to arrangements by Melba Liston – and the horns do a nice job ... LP, Vinyl record album

Opus De Jazz
Savoy, 1955. Very Good
LP...$14.99
One of the best-known 50s jazz sessions from the Savoy label – a laidback classic that's a great illustration of the label's shift in modes after the early bop years! The setting here is relatively informal – with Milt Jackson as the ersatz leader, working almost in blowing session ... LP, Vinyl record album