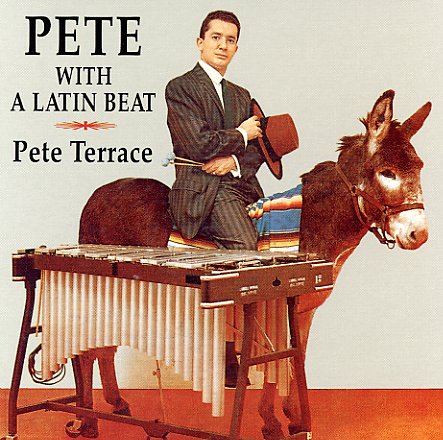 Pete With A Latin Beat

Pete in a very Latin Beat – playing vibes with heavy percussion, in a style that has equal parts jazz and equal parts Latin, and which moves past the sleepier sound of some of his earlier, mellower records. Cha cha is the basic groove of the tunes, but the execution and the heavier style of instrumentation takes many of the numbers past the stock formula of the era – thanks to Pete and his sweet work on vibes! Titles include "Terrace Jump", "Playboy", "Blen Blen Blen", "Toni's Cha Cha", and "The Baker".  © 1996-2022, Dusty Groove, Inc.
(Mono black label pressing with deep groove. Cover has some wear and aging, with a large stain at the bottom right, split bottom seam held with clear tape, and a shop stamp in back.)