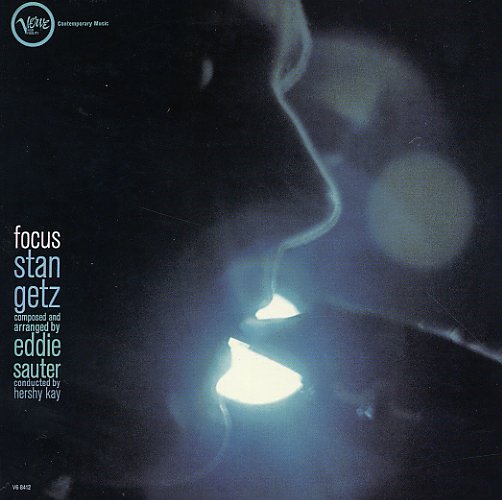 Oft-overlooked album that's actually one of Getz's most far-reaching of the 60s! Recorded in the year before he got caught up in his bossa pop frenzy, the record shows Getz as a darkly toned modernist, weaving out complex solos over the album's extended suite "Focus", written and arranged by the great Eddie Sauter, with whom Stan worked on the Mickey One soundtrack. The album's a surprisingly refreshing one, and shows yet another complex side of Getz's endlessly compelling career. Titles include "Pan", "Her", "Night Rider", and "Once Upon A Time".  © 1996-2022, Dusty Groove, Inc.
(MGM mono pressing. Cover has light wear.)

Focus (70s issue)
Verve, 1961. Near Mint- Gatefold
LP...$11.99
Oft-overlooked album that's actually one of Getz's most far-reaching of the 60s! Recorded in the year before he got caught up in his bossa pop frenzy, the record shows Getz as a darkly toned modernist, weaving out complex solos over the album's extended suite "Focus", written and ... LP, Vinyl record album

Master
Columbia, 1975. Near Mint-
LP...$13.99
A gem of a session from Stan Getz – recorded in 1975, but unissued until the mid 80s! The set was probably lost amidst the flurry of more dramatic jazz recorded by CBS at the time – as it's a relatively understated session that has Stan blowing with acoustic accompaniment from Albert ... LP, Vinyl record album

Sweet Rain
Verve, 1967. Very Good+ Gatefold
LP...$23.99
One of Stan Getz's greatest records – no fooling! This gem often gets overlooked because it was issued in the years between Stan's bossa recordings and his later pop experiments – but trust us, it's a totally solid jazz album, with a quality level that was hardly ever matched by Getz ... LP, Vinyl record album

Impeccable Mr Wilson
Verve, 1956. Very Good
LP...$5.99
The title's certainly right on this one – as Teddy Wilson's approach to the keys is as impeccable as his look on the cover of the record! The tunes are short, but they're filled with plenty of bright notes – a masterful illustration of economy on the keys of the piano – but one ... LP, Vinyl record album

Blues Summit (Side By Side/Back To Back)
Verve, 1959. Very Good+ 2LP Gatefold
LP...$16.99
A great little album that builds on the strength of Johnny Hodges' small group 50s sessions for Verve – and which lets Duke Ellington in on some of the action! The format is nicely stripped-down throughout – featuring Hodges in sextet and septet formation with players that include Ben ... LP, Vinyl record album