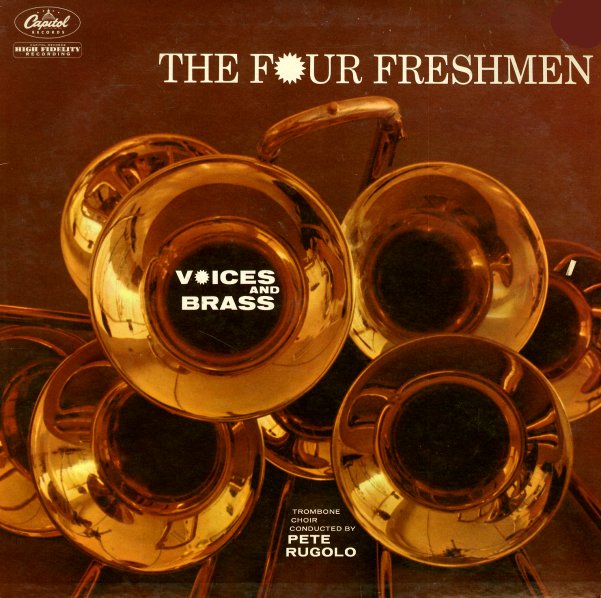 One of the greatest records ever by this amazing vocal combo! The album's got crack arrangements by Pete Rugolo, with the kind of off-kilter sound that he brought to his best work with June Christy and to his own records on Mercury. The Freshman, as always, are in perfect form – and prove that they were the undisputed masters of jazzy harmony style – especially on cuts like "Stella By Starlight", "I'm Glad There Is You", "Laura", and "Never Again".  © 1996-2021, Dusty Groove, Inc.
(Rainbow label mono pressing. Cover has a split spine and top seam.)

This Is Sinatra Vol 2
Capitol, Late 50s. Near Mint-
LP...$6.99
A great collection of Sinatra's non-LP material for Capitol in the 50s – done as a follow-up to the similar This Is Sinatra set! The record does a good job of showing the side of Frank that most listeners were familiar with at the time – possibly even more familiar with than from his ... LP, Vinyl record album

Just One Of Those Things
Capitol, 1957. Very Good
LP...$7.99
Titles include "When Your Lover Has Gone", "These Foolish Things", "Just For The Fun Of It", "The Party's Over", and "The Song Is Ended". Billy May arrangements! LP, Vinyl record album

Is That All There Is?
Capitol, Late 60s. Near Mint-
LP...$9.99
A classic set of tracks from Peggy – featuring the sublime hit "Is That All There Is?", produced by Lieber & Stoller, and arranged and conducted by Randy Newman. Other arrangements are by the likes of Mike Melvoin, Mundell Lowe, George Tipton, and Bobby Bryant – all of ... LP, Vinyl record album

Urszula
Arista, 1975. Near Mint-
LP...$39.99
Scatting jazz vocals meet funky fusion – and the result is one of Urszula's greatest albums from the US! The set was produced by longtime partner Michal Urbaniak – with a tight and soulful approach that nicely reigns in some of the experiments of earlier years, in favor of tracks that ... LP, Vinyl record album