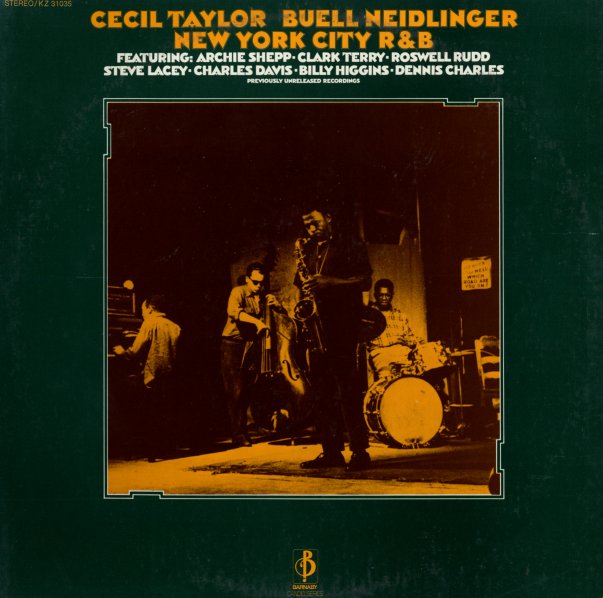 An early 60s session by Cecil Taylor for Candid, and a record that's one of our favorites by him from the early years! Despite the seemingly odd use of the term "R&B" in the title, the record's actually got a sound that's a bit more soulful than usual for Cecil, with surprising use of blue chords and deep rhythms that make for tunes with a different feel at points – yet a groove that's still as modern as you might expect from Taylor! Neidlinger was actually the leader on this session, which we think wasn't issued except for the Jazzman and Barnaby series that dug through the Candid vaults some years after this it was recorded – so they took advantage of Taylor's greater notoriety when they cooked up the packaging. Other sidemen include Archie Shepp, Billy Higgins, Dennis Charles, Clark Terry, Steve Lacy and Roswell Rudd. 4 numbers in all, "Things Ain't What They Used To Be", "Cell Walk For Celeste", "OP", and "Cindy's Main Mood".  © 1996-2021, Dusty Groove, Inc.
(70s Barnaby pressing. Cover has a cutout notch. Shrinkwrap has a trace of a price sticker.)

Blues To Coltrane
Candid (Germany), 1961. Near Mint-
LP...$24.99 (LP...$24.99)
The only session as a leader from trumpeter Cal Massey – a big influence on soulful modernism in the 60s, but an artist who showed up more in the liner notes for records than he did in the studio! The record's a really unique one – and a set that crackles with the best sort of ... LP, Vinyl record album