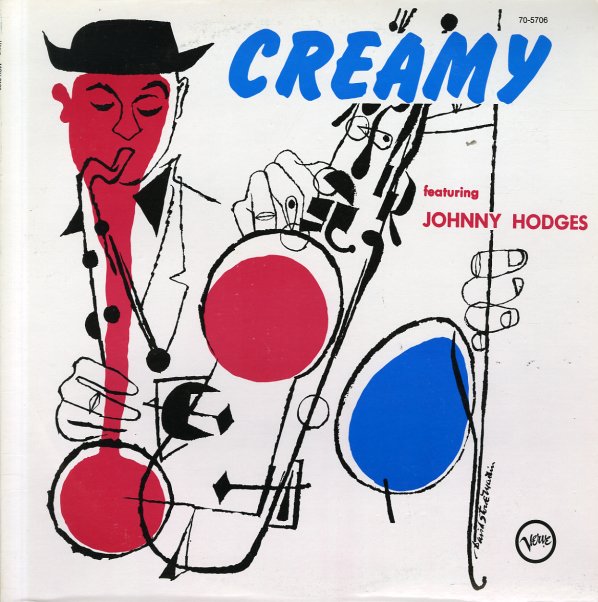 Swing session with small group backing by Billy Strayhorn, Jimmy Woode, Sonny Greer, and Clark Terry – and which features Johnny's warm tones soloing nicely on comfortable standards. All of side one is a "ballad medley", with a very Creamy sound, and titles that include "But Not For Me", "Prelude To A Kiss", "Whispering", and "Tenderly". The flipside's got a bit more kick, and titles that include "Honey Bunny", "Passion", and "No Use Kicking".  © 1996-2023, Dusty Groove, Inc.
(Verve Inc pressing, with trumpeter logo and deep groove – in a red/green cover. Cover has light tape on two seams, but is nice overall. Vinyl is nice!)

Back To Back
Verve, 1959. Near Mint-
LP...$24.99
Duke Ellington makes a rare Verve appearance on this classic album – and works strongly in the mode of earlier sides recorded for the label by Johnny Hodges! There's a relaxed, small group feel going on here – one that's a bit different than some of the tighter Ellington work on ... LP, Vinyl record album

Oscar Peterson Plays Porgy & Bess
Verve, 1959. Very Good
LP...$9.99
Less an interpretation of Porgy & Bess than an extrapolation of its themes – one that lets the Peterson trio recraft the music into their own! Given that the Porgy & Bess theme had been explored heavily by many other jazz albums of the late 50s – due to the release of the film ... LP, Vinyl record album