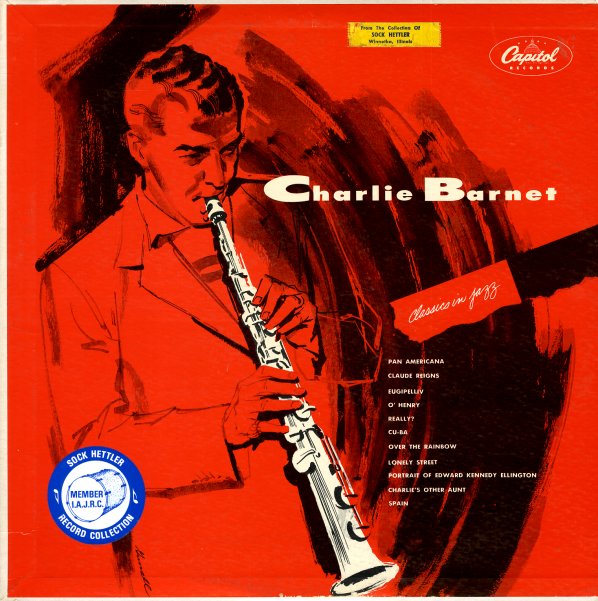 Capitol album that compiles some of Charlie Barnet's earlier 78rpm sides for the label, recorded in 1949 and 1950, with medium sized groups that have a good swing behind Barnet's firey tenor. Titles include "Cu-Ba", "Eugipelliv", "Lonely Street", "Pan Americana", and "Spain". Nice stuff, with more sophistication than you'd imagine!  © 1996-2021, Dusty Groove, Inc.
(Mono teal label pressing. Cover has a promo ink stamp and sticker, a small name in pen twice and a name ink stamp on the front and labels.)

Plays Bird
Capitol, 1973. Near Mint-
LP...$1.99
A completely fresh take on the Charlie Parker aesthetic of the bop generation – updated for the 70s, but in ways that are still pretty classic overall! The group's a large one, but plays with a tightness that goes way past their gimmicky name – thanks to players who include Med Flory ... LP, Vinyl record album

Cannonball Adderley Live!
Capitol, 1964. Very Good+
LP...$7.99
Cannonball Adderley with David Axelrod production – a combination that couldn't miss back in the 60s! In keeping with the success of the Mercy Mercy Mercy album done with Axelrod, Capitol did everything they could to catch Cannonball in a live setting – a great move, given the open, ... LP, Vinyl record album

Cannonball Adderley & Friends (2LP version)
Capitol, 1960s/1973. Sealed 2LP Gatefold
LP...$28.99
A really great testament to the wide warmth and many talents of Cannonball Adderley – as well as a portrait of just how much he'd touched the world of jazz in the short time he was on the planet! The set brings together collaborations between Cannon and a variety of artists – pulled ... LP, Vinyl record album

Price You Got To Pay To Be Free
Capitol, 1970. Very Good+ 2LP Gatefold
LP...$23.99
Fantastic work from the massive electric years of the Cannonball Adderley Quintet – one of the group's last records to feature the keyboards of Joe Zawinul – and also one of the heaviest from the time! The set's a double-length gem that presents the group in an open live setting – ... LP, Vinyl record album

New Concepts Of Artistry In Rhythm
Capitol, 1952. Near Mint-
LP...$9.99 (CD...$3.99)
Beautiful modernist work from Kenton – one of the first albums to cull his genius together as a whole, filled with the kind of tracks that perfectly sum up his unique approach at the time! If you've ever wondered what makes Kenton so great, this is the album to begin with – as it's ... LP, Vinyl record album

Big Horn
Capitol, Late 50s. Very Good
LP...$11.99
Sam was the very popular tenor player behind Louis Prima's best recordings of the 50s – and although he was never given his due as a full-time honker and shouter, he actually played a pretty mean horn when he wanted to, which he does to full effect on this Capitol set from the late 50s. The ... LP, Vinyl record album

Artistry In Voices And Brass (potrait cover)
Capitol/Creative World, 1963. Near Mint-
LP...$3.99
Moody 60's set in which Kenton has Pete Rugolo re-arrange some of his classics, then set them to lyrics written by Milt Raskin, which are then sung by a wispy chorus. Mood music, but with an edge, and nice modernist Kenton overtones. Titles inlcude "Flame", "Moonlove", "Da ... LP, Vinyl record album