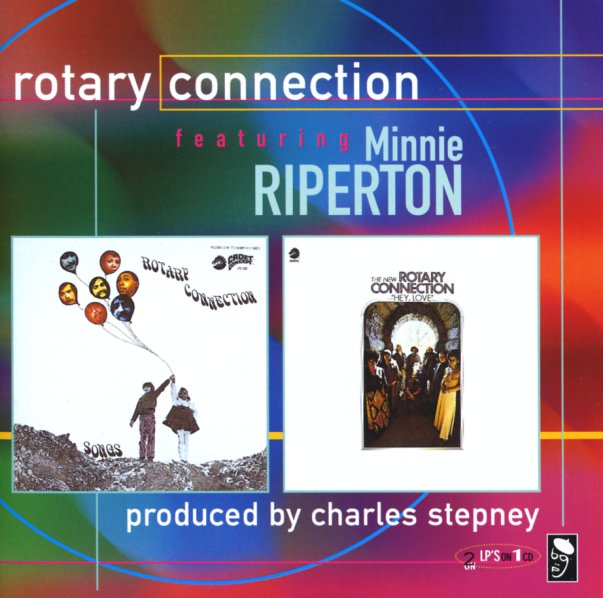 A pair of gems from the legendary Rotary Connection – an early Chicago group that featured Minnie Riperton on vocals, and Charles Stepney on production! Songs is amazing soul from Rotary Connection – and one of their greatest albums! The "songs" concept has the group working over a bunch of tunes by other folks – and the record features many late 60s rock titles, redone with the group's incredible baroque soul sound. Charles Stepney did the arrangements, and the music has that airy eerie quality that worked perfectly for Minnie Riperton's amazing voice. Includes a stellar cover of "Respect", with a slow trippy groove that has been sampled over the years – plus a wild cover of "Tales of Brave Ulysses" that virtually defines the term "psychedelic soul". Other tracks include "The Weight", "This Town", "The Salt Of The Earth", and "Sunshine Of Your Love". Hey Love is a massively beautiful piece of work by "the new Rotary Connection" – a version of this groundbreaking Chicago soul ensemble which featured Phil Upchurch, Henry Gibson, and Charles Stepney – the cream of the Chicago production scene! Minnie Riperton's still in the band on vocals, and her work on the LP is similar to that on the legendary Come To My Garden LP. The album features the incredible track "I Am the Blackgold of the Sun" – a haunting soul anthem that has been a favorite of groovers for years, and which was later made into a house track by NuYorican Soul. A great album all the way through, and filled with loads of excellent cuts! Other tracks include "If I Sing My Song", "Hey, Love", "Love Has Fallen On Me", and a cover of Terry Callier's "Song For Everyman".  © 1996-2023, Dusty Groove, Inc.