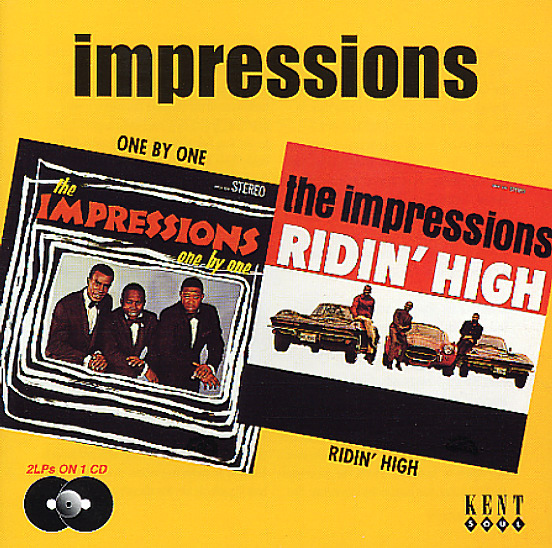 2 classic albums from the ABC Records years of The Impressions – back to back on a single CD! One By One is classic 60s Impressions material, with the legendary lineup firmly in place, and the great Johnny Pate handling all arrangements – really giving them that sense of righteous power that pushed their music past a lot of the previous group soul sounds of the Chicago scene – with a sophistication in both the instrumentation and harmonies that's completely sublime! The album mixes Curtis Mayfield compositions – like "Lonely Man", "Just One Kiss From You", "Falling In Love With You" – with special Impressions' takes on tunes that include "My Prayer", "Without A Song", "Answer Me, My Love", "I Want To Be With You", and "Nature Boy", which the group does incredibly well. Proof that the Impressions could shine, whatever the setting! Riding High is a record in which the title and cover say it all – because The Impressions are at the top of their game – riding high on a tremendous wave of soul, and soaring forth with a sense of pride and power few other groups could match! Maestro Johnny Pate is on board to handle the arrangements and production – and he helps Curtis Mayfield and the group reach a sound that's sophisticated throughout, but still retains a deeply personal sensibility. The harmonies are tremendous – never too sweet or too smooth, and always with that slightly fragile quality that made The Impressions one of the most human soul groups of their era. Nearly all the tunes are originals from Curtis – and titles include "Riding High", "Too Slow", "Man's Temptation", "I'm A Telling You", and "I Need To Belong To Someone".  © 1996-2022, Dusty Groove, Inc.