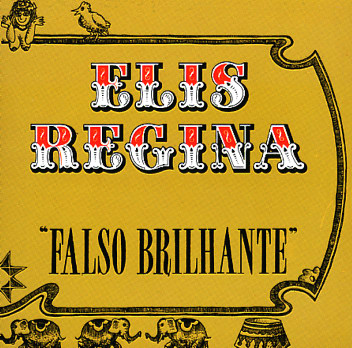 One of the most diverse albums that Elis Regina cut during the 70s – a set that seems to leap from style to style with each new track, and really build from some of the more staid and jazz-based styles of her other records! Cesar Camargo Mariano is still in charge of arrangements here, but the overall sound is relatively different – mellow one minute, rockish the next, cast in stark piano after that, and always moving onward with the sort of variety we might expect from Gal Costa or Maria Bethania at this point. Some cuts are tinged with Latin and South American instrumentation, while others more guitar and electric keyboards – and highlights of the album include versions of two Joao Bosco songs "O Cavaleiro E Os Monihos" and "Jardins De Infancia", which has a beautiful soaring electric feel to it, and is a real groover along the lines of the tracks you might find on Blue Brazil. Other titles include "Tatuagem", "Como Nossos Pais", "Velha Roupa Colorida", "Los Hermanos", and "Um Por Todos".  © 1996-2020, Dusty Groove, Inc.
(A nice copy! Cover has a small import sticker in one corner.)