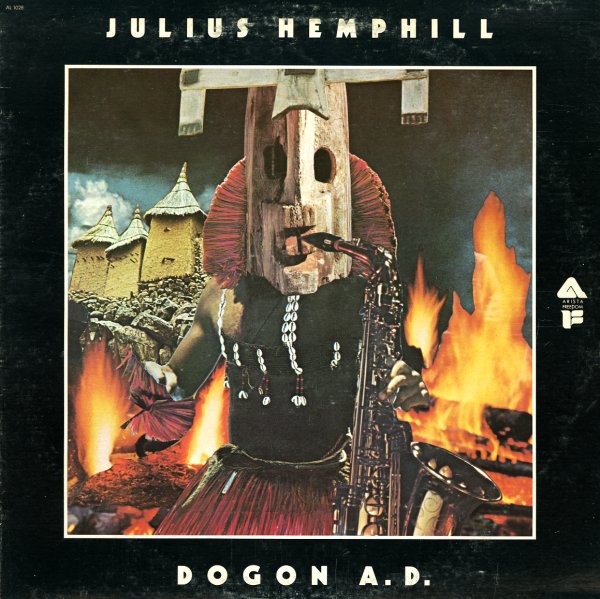 A seminal session from the St Louis scene of the early 70s – one that was humming nearly as much as Chicago was with the AACM at the time! As with the larger organization in the Windy City, St Louis had the Black Artists Group – of which Julius Hemphill was a key member, forming fresh new ideas in improvisatory jazz with players who went onto have an undeniable impact on the global scene as well. This album's one of the standout recordings of the Black Artists era at its best – a record produced by Hemphill, but equally balanced between his own alto and flute, the trumpet of Baikida Carroll, cello of Abdul Wadud, and drums of Phillip Wilson – plus a bit of added baritone from Haimet Bluiett. The rhythms are quite open, but there's also a nice sense of structure to the record too – a bridge between spiritual and free jazz that prefaces the impact that both Hemphill and Bluiett would have on the New York loft jazz generation. Titles include "Dogon AD", "Rites", and "The Painter".  © 1996-2022, Dusty Groove, Inc.
(Original 70s pressing! Cover has some light wear, but is nice overall.)

Water Sign
Arista, 1979. Very Good+
LP...$7.99
A landmark set of fusion from Jeff Lorber – the major label debut of his group, and the virtual blueprint for a sound that many would try to copy over the years, but never quite match! The style's almost a summation of the CTI/Kudu approaches of the mid 70s – with Lorber setting down a ... LP, Vinyl record album

Rockin Radio
Arista, 1983. Very Good+
LP...$6.99
A classic killer from trumpeter Tom Browne – a smoking set that still has all the jazz funk touches of his earlier records, yet which also picks up a bit of an electro vibe as well! The move here is a bit like that taken by some of Browne's labelmates on GRP at the time – particularly ... LP, Vinyl record album

Yours Truly
GRP/Arista, 1981. Very Good+
LP...$9.99
A sweet bit of electric funky jazz from Tom Browne – a bit tighter and with more of an 80s groove than some of his earlier work, but still pretty darn nice! Tom's always great – blowing over the top in spare, but well-placed trumpet solos – and the backing on the album shifts ... LP, Vinyl record album

Bar Talk
Arista/Novus, 1980. Near Mint-
LP...$39.99
Guitarist John Scofield works here in a wonderful setting – a loose trio with bassist Steve Swallow and drummer Adam Nussbaum – both of whom provide just the right sort of open, spacious sound to work with Scofield's tone! John's got that very chromatic way of playing at this point in ... LP, Vinyl record album

Flip Top
Arista, 1964/1977. Near Mint-
LP...$14.99
Tremendous work from trumpeter Ted Curson – and one of the few records that shows up often in his oeuvre, but which is every bit as great as his rare and expensive albums! Side one features killer material from Curson's group with tenorist Bill Barron – three cuts recorded in Paris in ... LP, Vinyl record album

Wizard Island
Arista, 1980. Near Mint-
LP...$6.99
A real classic from Jeff Lorber – the kind of record that crossed-over immediately, and had a huge influence on so many different scenes! The style is smooth sweet fusion – of a sort that Lorber virtually helped invent, and so many others helped to ruin in later years – but here, ... LP, Vinyl record album

Film Noir
Arista/Novus, 1980. Near Mint-
LP...$11.99
One of the most evocative albums we've ever heard from pianist Ran Blake – a set that's got all the sharp edges of some of his most adventurous solo work, but one that also has Ran working in a few different settings, often with a very poetic feel! The set's not a hokey retro-crime record ... LP, Vinyl record album