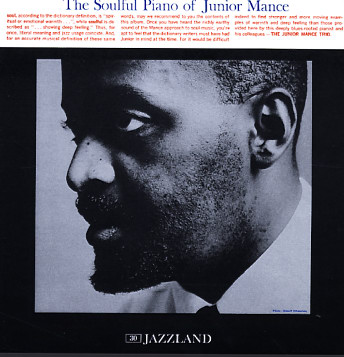 Tight tight tight trio material from Junior Mance – a player who'd been around for a number of years before the soul jazz wave of the early 60s, but who really found his sound at the time of this set! The sound here is sharp, but never too over the top – not the fierce left-hand soul jazz that sometimes got cliched from other players, but a mode that allows for plenty of free lines on the right, but always in a way that comes back to a rhythmic groove. The trio features Ben Tucker on bass and Bobby Thomas on drums – and titles include "Main Stem", "The Uptown", "Ralph's New Blues", and "Swingmatism".  © 1996-2020, Dusty Groove, Inc.
(70s Japanese Victor pressing, with obi and insert.)