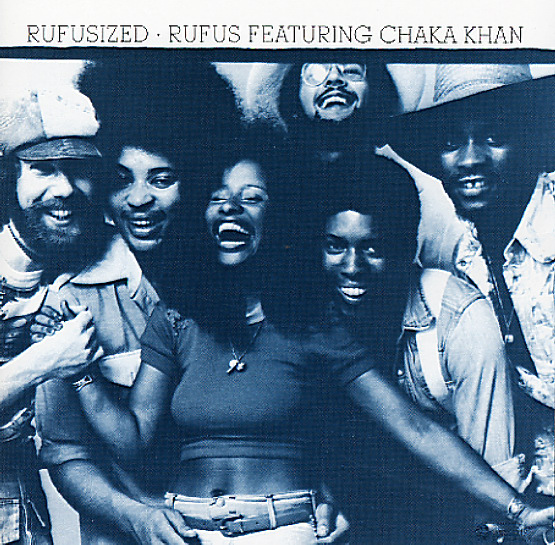 Funk, soul, jazz, and plenty more – all wrapped up into this 70s masterpiece from Rufus – the kind of record that not only never gets old, but which still has folks wondering how the group could have gotten things this perfect all these many years later! Chaka Khan and the group are in sublime formation here – tight, but never slick – sublimely soulful, but never in a way that sounds like they're trying to copy anyone else at all – always in this unique blend of all the best elements from all their favorit styles, fused into a fresh new sound that's completely Rufus-like all the way through! Titles include the incredible track "Stop On By", plus the instrumental "Rufusized", "I'm A Woman", "Somebody's Watching You", "Please Pardon Me (You Remind Me Of A Friend)", and "Right Is Right".  © 1996-2023, Dusty Groove, Inc.
(Cover and labels have a name in pen, but is great overall!)

Rags To Rufus
ABC, 1974. Very Good+
LP...$11.99
One of those records that everyone seemed to own, back in the day – and for good reason, too – as Rufus and Chaka have a way of opening ears of folks who dig so many different styles – from soul to rock to funk and jazz – but all with a groove that's totally their own! The ... LP, Vinyl record album

Any Time Any Place
ABC, 1979. Very Good+
LP...$7.99 (CD...$11.99)
One of the excellent recordings made by The Dramatics at ABC – great group soul gems that are sometimes overlooked because they didn't yield as many hits as earlier sets – but which are stellar records nonetheless! This one's got all the right elements firmly in place – killer ... LP, Vinyl record album

I Love You
ABC, 1969. Very Good+
LP...$13.99 (CD...$19.99)
Eddie's masterpiece LP of late sixties soul, with the classic "Hey There Lonely Girl", the title cut, and a lot of other great original compositions. The sound on here is perfect, and nearly every cut shines. There's almost no filler, and Eddie's voice is strong, beautiful, and has a ... LP, Vinyl record album

Odetta Sings The Blues (aka Odetta & The Blues)
Riverside/ABC, Early 60s. Near Mint-
LP...$9.99
Early early work from Odetta – still done in the folksy mode you'd expect from other records of the 60s, but also with a slight flavor of trad jazz too – thanks to the presence of some great musicians on the date! The group features some standout horn work from Buck Clayton on trumpet, ... LP, Vinyl record album