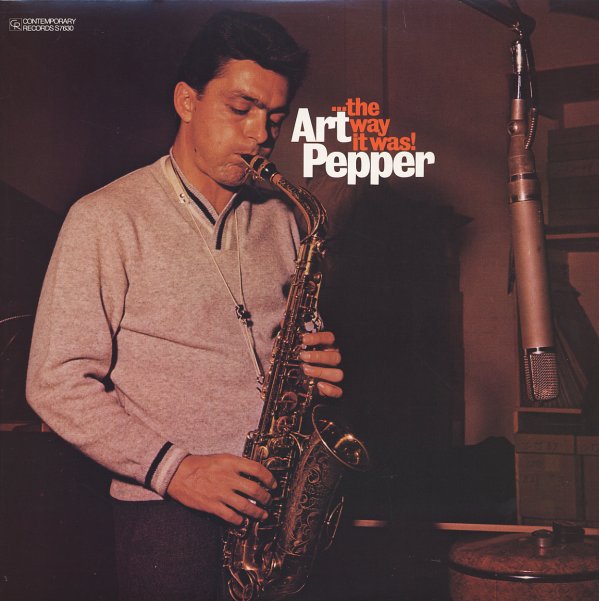 One of our favorite albums ever by Art Pepper – even if it isn't a proper album! The set features material recorded in the late 50s, pulled together to form an album in the early 70s – and overall, it's some of the best Art Pepper work on record we can think of. Pepper plays beautifully on 4 tracks with tenorist Warne Marsh, and the rest of the cuts features equally great accompaniment from the likes of Jimmy Bond, Dolo Coker, Philly Joe Jones, and Red Garland. The material on the album is far fresher than most of Pepper's so-called "classic" sessions, and it shows the edge and creativity of his alto playing in a way that few other albums ever do. We really recommend this one if you've ever been disappointed by another Pepper album – because there's a sharpness here that really comes through. Titles include "All the Things You Are", "What's New", "Autumn Leaves", and "The Man I Love".  © 1996-2022, Dusty Groove, Inc.
(Japanese pressing, with obi – SR 3158)

Artistry Of Pepper
Pacific Jazz, 1957. Near Mint-
LP...$28.99
Classic Art Pepper material, recorded in one of his comeback periods, and featuring the famous Richard Claxton photo of Art Holding his horn next to a tree. There's several different lineups featured, with a coupl of quintet and quartet sides, and a few with larger horn section, and the sidemen ... LP, Vinyl record album

Easy Living
Contemporary, 1985. Very Good+
LP...$14.99
A great date from the later revival years of altoist Frank Morgan – thanks to a warm performance from the Cedar Walton trio! One of the great things about late Morgan is the way in which he's able to really fit himself into different settings – still holding onto his soulful roots, but ... LP, Vinyl record album

My Fair Lady (Contemporary)
Contemporary, 1956. Near Mint-
LP...$14.99 19.99 (CD...$3.99)
A key early entry in the "jazz meets Broadway" genre – and a record that was so successful, it went onto inspire countless imitations! Shelly Manne's working here in a lightly playful trio setting – alongside Andre Previn on piano and Leroy Vinnegar on bass, in a reading of ... LP, Vinyl record album

Some Like It Hot
Contemporary, 1959. Near Mint-
LP...$11.99
A pretty nice jazz tribute to the Billy Wilder film of the same name – and one that reprises a number of tunes from the film, especially popular songs of the 20s – but brings them back in a way that's still got plenty of hip 50s jazz touches! The record's nicely without the hoke that ... LP, Vinyl record album