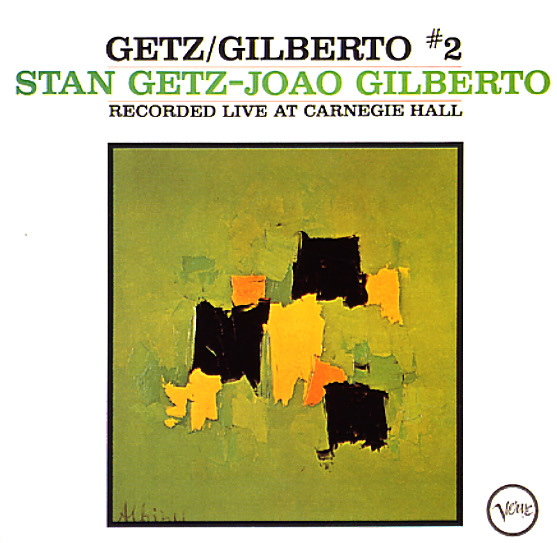 A very different record than the first collaboration between Stan Getz & Joao Gilberto – but that's also one of the things that makes it great! The album's more of a split LP than a shared one – as side one features a live performance from the great mid 60s Stan Getz quartet that featured Gary Burton on vibes – a wonderfully cool combo that was very under-documented on record, and which makes a key appearance here. The combination of Burton's vibes and Stan's tenor is pure genius – a sound that's got all the subtle hues and cool colors of the Getz bossa recordings, but which is quite different overall. Stan's tone is amazing on these tunes – and titles include "Here's That Rainy Day", "Tonight I Shall Sleep With A Smile On My Face", "Grandfather's Waltz", and "Stan's Blues". Side two features Joao Gilberto without Stan – playing in a very groovy trio that's more straight bossa than most of his other US recordings – cool small combo grooving that's totally great! The lineup features Gilberto on guitar and vocals, Keeter Betts on bass, and Helcio Milito on drums – all working in a sweetly grooving mode on titles that include "Samba De Minha Terra", "Meditation", "Bim Bom", "Rosa Moreno", and "O Pato".  © 1996-2022, Dusty Groove, Inc.
(Stereo MGM pressing with deep groove and Van Gelder stamp. Cover has light surface wear.)