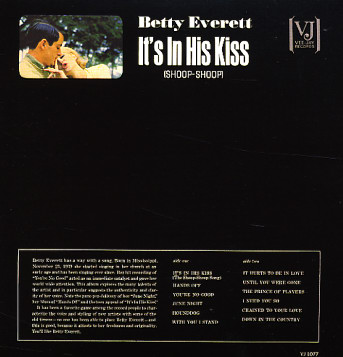 It's In His Kiss (Shoop-Shoop)

A key set of early work from Betty Everett – and a great document of the strength of her early soul on Vee Jay! Although the title hit is quite familiar (and possibly a bit overplayed), Betty was a great vocalist with a wide command of material even at this early point in her career – and the album has her running through numbers that easily step between jazzy, bluesy, and soulful modes that beautifully bridge the worlds of soul and R&B! You might want to skip past the title hit, lest it color your judgment of the record, because there are loads of nice tracks on here, like "It Hurts To Be In Love", "Until You Were Gone", "The Prince of Players", and "I Need You So".  © 1996-2021, Dusty Groove, Inc.
(Mono rainbow label pressing with deep groove. Cover has black electrical tape holding the seams and spine and some surface wear.)

There'll Come A Time
Uni, 1969. Very Good+
LP...$14.99
A great near-lost slice of Betty Everett's career – material recorded for Uni Records, in the years after her first big hits on Vee Jay! The sound here is a lot more soulful than on earlier albums – more grown-up and sophisticated, yet also retaining the best sweeter touches that made ... LP, Vinyl record album

Best Of Dee Clark
Vee Jay, Early 60s. Sealed
LP...$11.99
Classic Chicago soul from the great Dee Clark – one of the most versatile vocalists ever to work for Vee Jay Records, as you'll hear on this set! Dee could be sweet one minute, rocking the next – and had a great vocal range that was always used well on the range of material he sung. ... LP, Vinyl record album

Goodnite It's Time To Go
Vee Jay, Late 50s. Near Mint-
LP...$14.99
A rare album of classic doo wop – from one of Chicago's greatest harmony groups! In contrast to labelmates The El Dorados, The Spaniels were a bit smoother, and added more of a sweet harmony sound to their style – as you'll know from tracks like "Goodnite Sweetheart Goodnite" ... LP, Vinyl record album

Blue Magic
Atco, 1974. Very Good-
LP...$19.99
The start of a tremendous run from Blue Magic – easily one of the greatest harmony groups of the 70s, a quintet we'd place in a rare class with heavy hitters like The Stylistics or The Moments! The album's smooth and sweet, but never slick – perfectly arranged by the great Norman ... LP, Vinyl record album

Bealtitude – Respect Yourself
Stax, 1972. Very Good Gatefold
LP...$16.99
About as classic as you can get with the Staple Singers! The record was cut at that perfect moment when the group was forging an electric soul sound that would bring them high in the charts in the 70s – filled with all the righteousness of their gospel years, but also touched with elements ... LP, Vinyl record album

You've Made Me So Very Happy
Capitol, Late 60s. Very Good-
LP...$4.99
All the best elements for Lou's Capitol work are in place – arrangements by HB Barnum, production by David Axelrod, and a hip batch of pop tracks that really push Lou into a whole new dimension! Axelrod really knows how to bring up the bass in the arrangements, and create just the right ... LP, Vinyl record album

1999
Warner, 1982. Very Good- 2LP
LP...$29.99 (CD...$3.99)
The record that forever put Prince on the map – a legendary set that took him from being an under-appreciated soul singer to a lasting pop music legend! Prince had been around for a few years before 1999 – but the double-length set was the first to really win over the masses to his ... LP, Vinyl record album

Blowfly's Zodiac Party
Weird World, 1978. Very Good-
LP...$16.99
Blowfly's second trip into the Zodiac – a free-wheeling, head-tripping party that's even rawer than the first set! Tracks, as usual, are based on grooves from popular soul songs of the time – hidden enough in the lyrics, and at times just spare funky vamping, which provides a ... LP, Vinyl record album

Poet
Beverly Glen, 1982. Very Good
LP...$7.99 (LP...$22.99)
The first of Bobby's highly successful Poet albums from the early 80s – wonderfully done albums that showed the world that he was still very much on top of his game at the time! The sound here is great – still with that older Womack rasp and warmth, but also done in a slightly smoother ... LP, Vinyl record album