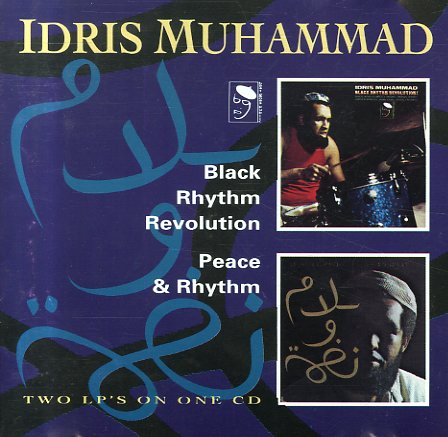 2 classics from the legendary Idris Muhammad! Black Rhythm Revolution is one of the first records ever as a leader from funky drummer Idris Muhammad – a set that was cut right at the same time Idris was burning up the kit on his classic jazz funk sessions with other Prestige label players! The groove here is tight, funky, and very much in the mode that Muhammad laid down for other bigger soloists – a solid, socking sound that was the early 70s inheritance of the "Popcorn" funk groove of the late 60s. Players here are all great – and include Melvin Sparks on guitar, Harold Mabern on electric piano, and Virgil Jones on trumpet – and tracks include great covers of "Express Yourself" and "Super Bad", plus "Wander" and "Soulful Drums". Peace & Rhythms is a wonderful departure from Muhammad – and proof that he could do a lot more than just provide heavy breaks for Lou Donaldson and Melvin Sparks! This set is surprisingly spiritual and righteous at points – with a groove that's almost more like Strata East than some of Muhammad's previous work as a sideman on Blue Note and Prestige. Side one features the extended "Peace and Rhythm Suite" – a beautiful cut that's filled with searching, soaring energy – and side two includes two vocal cuts "Brother You Know You're Doing Wrong" and "I'm a Believer", both sung by Sakinah Muhammad – plus "Don't Knock My Love". Players are all great – and a nicely different lineup than the usual Prestige jazz funk gang.  © 1996-2023, Dusty Groove, Inc.