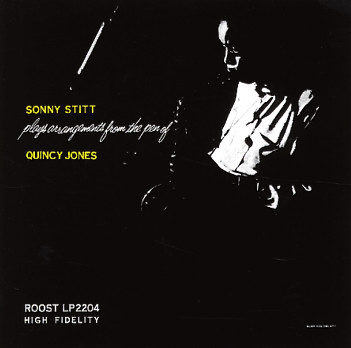 Sonny Stitt Plays Arrangements From the Pen Of Quincy Jones

Sonny Stitt plus the early genius of Quincy Jones – a really great combination that makes for a standout session on Roost! As you might guess with Quincy handling the arrangements, the group here is bigger than usual for Stitt – especially given that the bulk of his Roost sessions were small group ones – but that aspect makes for a really strong record here, one that has Sonny's alto soaring out over the top of some hiply swinging Jones' charts, already infused with the kind of soul that would burst forth more famously in the 60s. Titles include a few nice originals, like "Quince" and "Sonny's Bunny", but even on the standards – like "Stardust", "Lover", and "Love Walked In" – Stitt's in top form, and solos with creativity and imagination that show him at the top of his talents!  © 1996-2021, Dusty Groove, Inc.
(Japanese pressing – with obi!)

Giants Of The Piano
Roost, 1944/1947. Very Good+
LP...$8.99
A side each of material from these two wonderful pianists – both fantastically rhythmic players, in great company together! LP, Vinyl record album

My Dear Little Sweetheart
Roost, Early 60s. Very Good
LP...$9.99
One of the most obscure Johnny Smith albums for Roost – and one of the most striking, too! The album takes the sound of Johnny's guitar and backs it with some larger arrangements from Irwin Kostal – very mellow, and very string-laden – with a dreamy late nite quality that's even ... LP, Vinyl record album

Johnny Smith Plus The Trio
Roost, 1960. Near Mint-
LP...$11.99
A trio is helping out guitarist Johnny Smith – but, as with all of his other Roost Records of the time, the man himself is very far out in the lead – making real magic on the strings of his guitar, and playing with an effortless command of tone and color! Some moments of the record ... LP, Vinyl record album