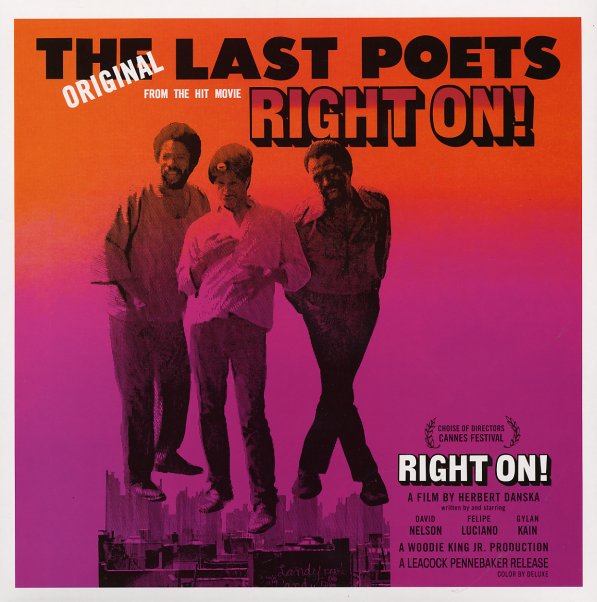 One of the wildest albums ever by the mighty Last Poets! Billed as "a woodstock in poetry", this is the soundtrack to the obscure film Right On (billed as "the hit film" on the cover), which was shot using the first version of the Last Poets that included Felipe Lucianao, David Nelson, and the wild card Gylan Kain – a group who originally had the name and style of protest poetry, but who had been eclipsed when the poet Abiodun left them and formed the group that first recorded for Douglas Records. The album, sort of a "we're back" effort, was produced by Juggy Murray, and apparently all recorded at the Cubiculo Theatre in New York – and it's one of two albums on the Juggernaut label, which also featured Kain's solo record. Most of the record is spare percussion, with the band shouting over the top – and the sound is even rawer than the group's first LP on Douglas. The titles should say it all – as the record features "My Pretty N*gger", "Tell Me Brother", "Die Nigga!", "James Brown", "Soul", "Poetry Is Black", "Into The Streets", and "Library.  © 1996-2021, Dusty Groove, Inc.
(Original pressing. Cover has some ring and edge wear, a 3 inch split in the top seam, and small sticker remnants on front.)