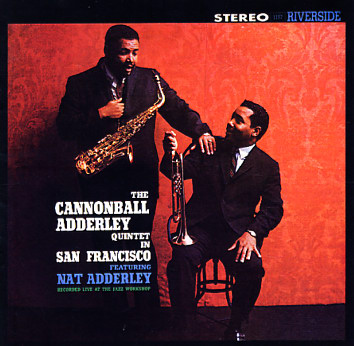 One of the greatest Cannonball Adderley albums from the Riverside years – a completely smoking live date recorded in San Francisco, often with long tracks that really let the group open up and do their thing! The lineup here is that classic one that first grabbed attention – the group with brother Nat on cornet, Sam Jones on bass, Louis Hayes on drums – and a young Bobby Timmons on piano, really cooking things up with tremendous drive, energy, and a sense of the groove! Titles include a great workout on Timmons' classic "This Here", plus originals "You Got It" and Spontaneous Combustion", and a great version of "Hi Fly". Soul jazz at its best, by one of the groups who gave the genre its name in the first place!  © 1996-2021, Dusty Groove, Inc.
(Small blue label Bill Grauer Productions pressing, RLP 12-311, with microphone logo and deep groove. Cover has a split top seam, heavy edge wear, and discoloration from age.)